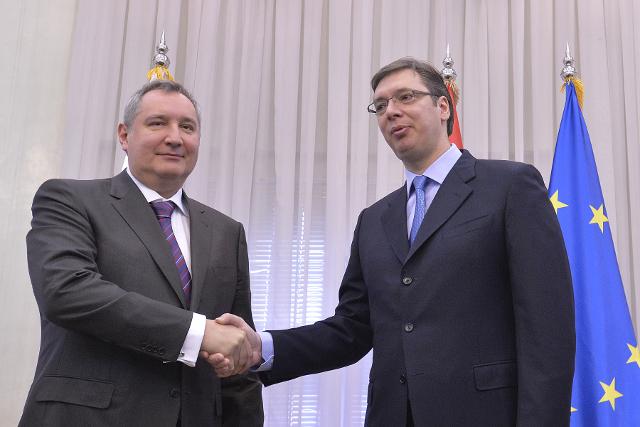 Vucic stressed he had a message for "some analysts" who claim the state was misleading citizens, while this reaction was based on "semi-information" they had read - and explained Serbia was "working to strengthen its own capacities."

"We are increasing our manufacturing. This year you will see for the first time our mass production of Nora (artillery system), Lazar 2 and 3 (armored vehicle), that our army will use. The money is not coming from the budget, but from our state-owned companies," he said, telling "ignoramuses" that they "cannot be explaining what they do not know."

The prime minister stressed that countries in the region have obligations under the Dayton peace agreement and other agreements when it comes to arming themselves - something that "others do not respect, and claim Serbia is nervous."

"I am concerned, not nervous. The ballistic missiles and launchpads that Croatia plans to buy have the range of 300 to 350 kilometers. You can target, from Zagreb or any other town, any town in central Serbia," Vucic said, responding to reporters' questions.

He also "stressed that all countries in Serbia's surroundings are NATO members, while only Serbia is militarily neutral," Tanjug reported. Vucic added he saw "no need for acquisition of offensive weapons."

The prime minister repeated that he "pleaded with the U.S. and the Croatian friends not to arm themselves, because we in Serbia think peace and stability is something the region needs the most."

Serbia, he reiterated, is in favor of "peace, full stability in the region, best relations with all its neighbors."

"Serbia will never attack anyone, but must be able to protect its territory and citizens at any moment. We are keeping quiet, doing nothing faced with the threats of those others who are not giving up on acquiring very powerful offensive weapons," he has been quoted as saying.

Vucic said Serbia "has not money to pay the highest price and can only secure money for small amounts of certain weapons."

"The Russian side was fair and concrete by offering us better conditions than to anyone else. Months and years of discussions about that are ahead of us," he said.

Asked about Russia's S-300 air defense system, Vucic said it was "too expensive" - but that the Russian side "expressed its desire to help via certain arrangements."

As they exchanged gifts today, Rogozin gave Vucic a model of an S-300.

Vucic thanked the Russian Federation for respecting Serbia's decision to remain neutral, and stressed that while the country was fulfilling all its obligations on the path of joining the EU, it did had not, and will not join anti-Russian sanctions.

Addressing other topics, he said that a decision on whether to hold early parliamentary elections has not yet been made, adding that he personally "wants to avoid them." As for a planned referendum in the Serb entity in Bosnia, he said he "does not wish to influence RS President Milorad Dodik not to call it by any kind of pressure, because that should be a sovereign decision of the RS, whether Serbia agrees with it or not."

Some kind of an agreement on exports of a certain number of Fiat vehicles to Kazakhstan could be reached already after January 15, says Serbian Prime Minister Aleksandar Vucic.

At a press conference with Russian Deputy Prime Minister Dmitry Rogozin, Vucic said that he asked Rogozin to act as a mediator in the deal during a meeting with Kazakhstan's deputy prime minister.

The deal would not only be significant profit-wise, but also as regards the relationship with the Italian investor and further investments in the automotive industry, Vucic said.

Vucic said that he also discussed with Rogozin the possibility of car parts being manufactured in Serbia and that it should be assessed whether the Serbian industry can do that for the Russian market, especially in the segment formerly covered by Turkish companies, which have been under Russian sanctions since January 1.