BELGRADE -- Serbian women's basketball national team, who won gold at the European Championship in Valencia, was welcomed in front of the City Assembly.

BELGRADE -- Serbian women's basketball national team, who won gold at the European Championship in Valencia, was welcomed in front of the City Assembly. 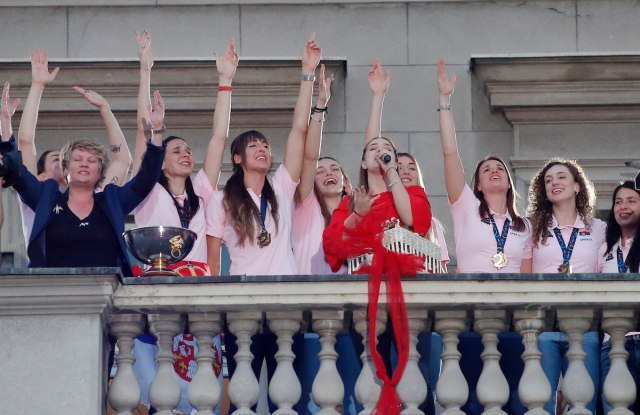 Several thousand people gathered in front of the famous balcony, probably the balcony with "the most trophies" in the world.

The music program was prepared together with the basketball players, and some songs that were heard tonight in the center of Belgrade, could be heard already during the championship.

Members of the professional staff, physiotherapists, scouts and assistant coaches were the first to appear before the citizens.

Then, one by one, the players from Serbia started coming out. Each received a standing ovation, especially Yvonne Anderson, a naturalized American who won the sympathy of Serbian fans, then Ana Dabović, Aleksandra Crvendakić, Tina Krajišnik, tournament MVP Sonja Vasić, and finally, team's captain Jelena Brooks.

In the end, a huge applause and chanting was reserved for the national coach Marina Maljković.

Then the anthem of the Republic of Serbia was sung, which was a particularly emotional moment for many basketball players.

Captain Jelena Brooks was the first to greet the audience, and then Yvonne Anderson said in pure Serbian:

"Thank you from the bottom of my heart. I love you very much. Long live Serbia!", the playmaker of Serbia said and delighted the gathered citizens.

Sonja Vasić was on the verge of tears both during the anthem and during her speech, and the coach Marina Maljković said:

"These are my Vidovdan champions", which was the introduction to the performance of the song "Vidovdan", presenting the most impressive moment of the reception.

The party on the balcony continued with Marko Mandić and the songs that the girls listened to during the championship on the way to winning gold.