BELGRADE -- I have worrying intelligence information that one great power will request the withdrawal of KFOR and the UNMIK mission from Kosovo, President of Serbia stated.

BELGRADE -- I have worrying intelligence information that one great power will request the withdrawal of KFOR and the UNMIK mission from Kosovo, President of Serbia stated. 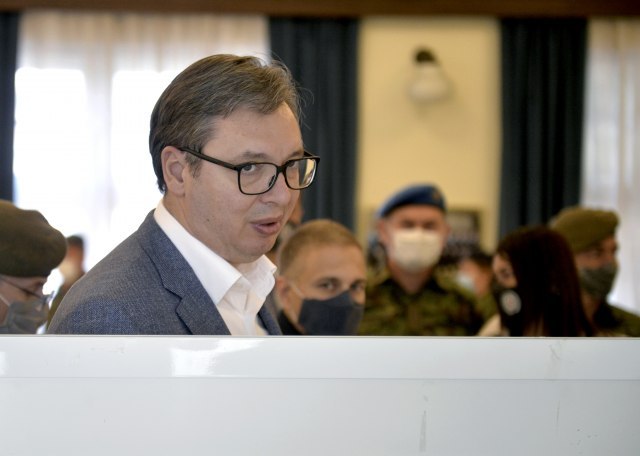 "It would be a disaster for us and I don't know if you are aware of what that would mean. I will ask Stoltenberg to use his influence to prevent that from happening," said Aleksandar Vucic, after visiting the barracks in Dedinje where members of the Guard were vaccinated today. Vučić said that important meetings are expecting him, that is, that the President of Slovenia would come to Serbia tomorrow, and that he would go to that country, to the summit, where he would meet with the leaders of the region, but also with Vjosa Osmani.

"From there, I go straight to Brussels, and in the evening I will meet with NATO Secretary General Jens Stoltenberg for dinner, and that conversation will be very important," said Vučić.

Vučić also said that he could not say which force was in question, but that it was intelligence information from official sources. Vučić said that the meeting with Stoltenberg will be of special importance. He added that Pristina announced that it would allocate 100 million euros annually for the army, which is incomparable with Serbia, which is at the level of two billion euros.

"These are not comparable data, we should not be afraid, but it is clear what they are up to," Vucic said.

Vučić referred to yesterday's statement of the Ambassador of Israel to Serbia, Jahel Vilan, who said on Television Prva that the country recognized the independence of Kosovo under American pressure.

"We withstood the toughest pressures, which even the most powerful states like Israel failed. The Israeli ambassador says: 'It was American pressure.' And I personally withstood that pressure in the White House, and it wasn't a problem. And that's why Serbia didn't do what Israel did," Vucic told reporters. After visiting the vaccination point in the Dedinje barracks in Belgrade, Vučić said that it was possible because he had fought hard for Serbia in the past year in difficult negotiations in Washington and Brussels.

Just to reiterate, Vilan said yesterday that Israel did not resist American pressure.