DAVOS -- Serbian President Aleksandar Vucic confirmed that he will participate in a panel at the World Economic Forum in Davos tomorrow with Hashim Thaci.

DAVOS -- Serbian President Aleksandar Vucic confirmed that he will participate in a panel at the World Economic Forum in Davos tomorrow with Hashim Thaci. 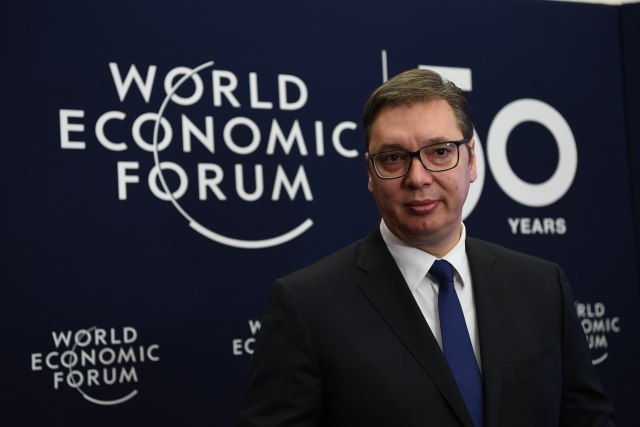 He added that he expected an exchange of arguments, in a civilized tone.

Asked what he expects from that meeting, Vucic says it will be an interesting meeting as well as there will be many leaders from Europe and the world.

Vucic notes that Thaci is still the legal president of temporary institutions in Pristina and adds:

"We will see what he says, and I will continue to represent Serbia's interests," Vucic said.

President of Serbia says that he is certainly not thrilled to see Thaci, but that his job is to represent Serbia and fight for its interests, and that people did not elect him president for him to be nice, but to solve problems and fought for his country.

"I expect an exchange of arguments, which will be neither simple nor easy, but I believe that in a civilized tone, we will be able to do that", Vucic said.

He added that there will be about 20 participants on that panel, which will be one of the most visited and important for the people of Southeast Europe tomorrow.

He rejected today the claims of Dveri leader Bosko Obradovic that the government is preparing to reduce the number of voters on the electoral roll and said that such statements show the frivolity and irresponsibility of "unprecedented proportions".

"I don't know what to say to that. These people do not know what they are talking about. How did he come with the digit of 4.8 million voters? How do we delete two million voters? They don't understand anything," Vucic said, commenting on Obradovic's allegations.

As he said - when your knowledge is modest, and you don't try to learn anything new, then you can say such things and invent such "foolishness".

"That speaks of their frivolity and irresponsibility of unprecedented proportions," Vucic added. He said the number of voters will be around 6.7 or 6.8 million.

"You can look, type in your computer and you will see that it has nothing to do with 4.8 million … Nevertheless, it is a complicated procedure for Obradovic and his partners", Vucic concluded.