Within 40 minutes, six patients had cardiac arrest and four died, CNN reports on a situation at a New York hospital 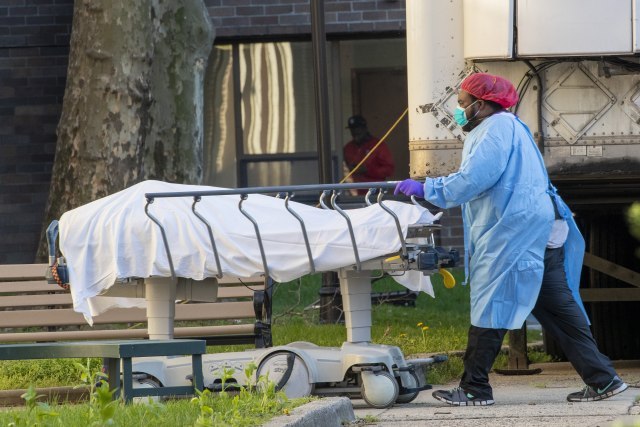 The hospital's "Code 99," a signal informing medical staff that the patient needed resuscitation, sounded five times in less than an hour.

"They're so sick that we lose them in an instant. They talk to you, and a few minutes later, we insert a tube into their throats and hope to put a breathing apparatus in to help them," Julie Eason, a respiratory therapist, told CNN.

CNN reporters have been called to the premises of a university hospital within SUNY University of Health Sciences in Brooklyn, one of three hospitals in the state of New York that now exclusively treats patients with coronavirus. Although fewer people come to the emergency center than before the epidemic, everyone has Covid-19 and is therefore more ill and the mortality rate is high. Nearly 25 percent of patients admitted to hospital died, Blic reports.

Doctors here only encounter patients suffocating of coronavirus, which has swept the world, and which, according to some scientists, in New York is nearing its peak.

Patients are constantly arriving at a hospital in Brooklyn, so medical staff do not have time to rest.

CNN's team saw a health worker wrap a dead patient's corpse in the sheet, which was taken within half an hour. Afterwards, they disinfected the room and another patient in a critical condition was brought to the same place, with an oxygen mask on his face.

Of the nearly 400 COVID-19 positive persons that have been admitted to the hospital, 90 percent are over the age of 45 and 60 percent are over 65, but the disease affects not only the elderly. The youngest patient was a three year old child. Describing young patients in their twenties, ambulance doctor Dr Lorenzo Paladino says some were crying and staring blankly.

"For them, this is an 'Grey's Anatomy', not real life. They should not see this," he adds.

While trying to remain calm, doctors, nurses, respiratory therapists, and hospital staff struggling to save patients are not used to these experiences, the number of suffocating people, the frequency of emergency calls, and the number of people they are unable to save.

"You usually have one emergency call, when it's a bad day, maybe two, it's a very emotional experience and you always wonder if you've done everything you could," says Dr Cynthia Benson, who works with Dr Paladin at the emergency center.

"I think it's emotionally very difficult to prepare in such a short time for this level of illness and suffering, morbidity and death. I don't think any of us are well prepared for this," says the doctor.

Since the start of the pandemic, three people have died at SUNY University Hospital three weeks ago.

Cheryl Rolston, a nurse and emergency center chief, says it's very hard to watch patients suffer without close people beside themselves.

"A patient's son called me and said, 'My father is eighty years old ... I know he will die ... And I am sad because he is dying alone.'

The data shows that the odds of surviving COVID-19 are slim even if they are attached to respirators, Paladino says.

Paladino is one of the scientists who has proven that one respirator can save two patients under certain circumstances. Although Kuomo claims that this has yet to be clinically tested, for Paladino, it is a solution to the problem of scarcity.

"We worry about what will happen when one day we don't have enough respirators. We don't want to choose between two patients who could survive by tossing a coin," he says.