There are almost no free capacities in hospitals, record number of patients on respirators, Arena accommodated whole families with severe symptoms of pneumonia. 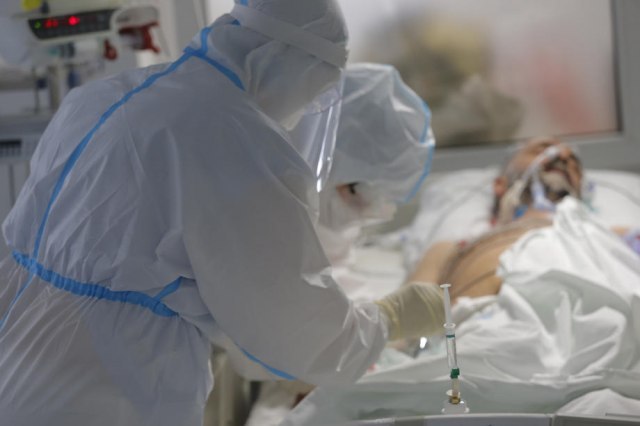 That is the real state of affairs when it comes to the epidemiological situation in Serbia. The Crisis Staff of Belgrade also met today, and new measures will take effect on the territory of the whole of Serbia tomorrow.

At the temporary COVID hospital "Arena", 484 COVID patients are currently being treated and there are about ten more empty places left, says the main coordinator of "Arena", Dr Predrag Bogdanović.

He told Tanjug that the discharges were in progress, that 30 to 50 patients were discharged daily, as well as that the health workers in that temporary hospital had a sleepless night because 60 patients were admitted for treatment, out of which 80 patients in the last 24 hours.

Critically in several cities in Vojvodina, Zrenjanin without hospital capacities

According to the information of the Institute of Public Health of Vojvodina, 15.651 active cases of the coronavirus are currently registered in the province, and there are 1.335 patients in hospital in all COVID capacities.

The Institute characterizes the epidemiological situation as extremely difficult with a tendency of further deterioration.

In that sense, they state that the number of newly infected does not stabilize or decrease, but grows day by day, putting all health workers in front of extreme effort and burden, and the entire health system in the temptation that the capacities of health institutions will be insufficient to receive all patients necessary.

An additional problem is that at this moment, 681 health workers in Vojvodina are ill, so that an increasing number of people are performing an ever-increasing amount of work.

The situation on the territory of the South Banat Administrative District is also critical, due to the almost full hospital capacities of the general hospitals in Pancevo and Vrsac, as well as in the Special Hospital for Lung Diseases in Bela Crkva.

An increasing number of patients and hospitalized is also recorded in general hospitals in Sremska Mitrovica, Kikinda, Subotica and Sombor.

At the moment, the most difficult situation is in Novi Sad due to the large number of patients with an extremely difficult clinical picture and a number that exceeds the capacities used so far in the fight against the pandemic.

Due to that, during the weekend, a part of the Institute for Lung Diseases of Vojvodina in Sremska Kamenica was turned into a COVID center and in just two days it was filled with two thirds of the total capacity, so there are currently 74 patients in that institution.