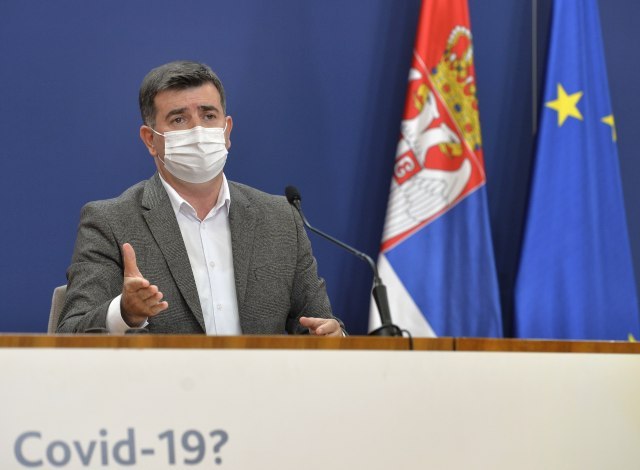 There are 3.499 newly infected in Serbia today, while 17 people died, and 158 are on respirators.

Belgrade is still the most serious with 1.597 confirmed cases, while the number of infected has increased in Novi Sad and now amounts to 330. There are 113 infected in Nis, while in Kragujevac there are 88, and in Kraljevo, there are 70 confirmed cases.

The law was published in today's Official Gazette, and the decisions of that law come into force immediately.

Total number of infected people in Serbia since the outbreak of the epidemic is 77.264, while 3.499 are infected today, it was said at the conference at the beginning of the address. Of that, 943 are health workers.

When it comes to new measures, the State Secretary of the Ministry of Health, Mirsad Djerlek, states that it is necessary to look at it from another angle.

"Attention should have been paid to whether these measures are being implemented, and what I want to emphasize are the amendments to the Law on Preventing Contagious Diseases. They do not have the character of a penal policy," he says.

As for the measures themselves - each segment is analyzed.

"We have to find a good balance between health care and the economy. There was talk of finding a way and a model to respect the measures taken, and we will not change anything with the new measures. The profession also discussed basic things - wearing a mask, distance, washing hands and everything which we have been talking about for months, so it was thought that masks should be worn outdoors, especially in pedestrian zones", he explains and adds that he is also thinking in the direction of sources of infection such as nightclubs.

He further states that new measures will be announced in the next two days.

According to Mirsad Djerlek, the number of patients in the statistics is higher than in the first two waves, and that was not expected. As he states, that is why a serious policy is being pursued, and the Crisis Staff is cautious when it comes to introducing new measures.

Most of the deceased are older people, while the group of 20 to 40 years old has severe clinical pictures, so he emphasizes that COVID-19 does not only affect older people.

When asked why the measures are being postponed and what is hindering the adoption of new measures the most, Djerlek answered:

"We used to bring much faster measures, now we are more experienced. We are looking for a way to weigh all the aspects of the epidemic and reach balanced solution."

He said that we must all learn to live with COVID-19 until the vaccine appears.

Djerlek adds that he recommends that citizens get vaccinated when the vaccine arrives.

He also emphasizes that all vaccines against coronavirus will be free, and the state will enable all those interested to be immunized, after the mandatory immunization of the army, police and medical workers.