Crisis Staff: The measure in effect during the state of emergency reintroduced VIDEO

The Prime Minister of Serbia, Ana Brnabic, said that the measures will not be reintroduced for the entire Serbia, but for individual cities and municipalities. 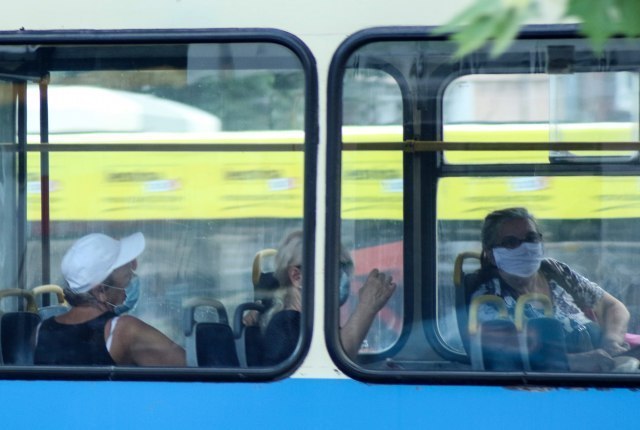 "If there is a need, then we will introduce an emergency situation in other local governments as well," she said.

The Prime Minister of Serbia, Ana Brnabic, said that many issues and problems were discussed, especially in Belgrade.

"We talked about whether we should return to where we were in March and April, reintroducing the measures for the entire territory of Serbia," Brnabic explained.

A complete ban on public gatherings of more than 10 people in Belgrade in all spaces, closed and open, is being introduced.

"We are also reintroducing the measure we had during the state of emergency, and that is limiting the number of people indoors," she said.

In all facilities in the capital, it is necessary to point out how many people can enter that facility, and that is one person per 4 square meters.

The third measure for Belgrade is the limitation of working hours from tomorrow onwards for facilities from 9 pm to 6 am.

"It does not only apply to catering facilities, but also to shops, malls and all other facilities. As for open gardens and facilities, they will be open from 11 pm to 6 am," Brnabic said.

"These are measures for Belgrade and we will see how we will proceed, we will introduces changes if necessary in accordance with the numbers," Brnabic emphasized.

Brnabic said that we will certainly pay dearly because of the protests that were held, and people were probably infected.

"We will hope that the measures we introduced earlier, and that is the obligatory wearing of masks, will start to give results," she said.

As she said, politics is now behind us, the elections are over.

Let's focus on combating COVID, I'm sure we will win. But this fight will not end until there is a vaccine," she concluded.

The Prime Minister stated that the question is how to organize classes in schools in September, which is a major problem.

Brnabic said that she thinks that the President of Serbia is 100 percent right, and that a complete ban on movement has been introduced, we would have results.

"For that, it is necessary to introduce a state of emergency for the entire territory of Serbia. Fortunately, we have a smaller number of local self-governments where we do not have a problem, than those where we have," Brnabic said.

She commented on the decision of the Crisis Staff so that those local governments in which the situation is under control, people should live normally as much as possible, because this situation will last for a long time.

"As far as curfew is concerned, it is certainly the most efficient. We wanted to try to take some intermediate steps for the sake of the economy and citizens, it may not give results. If not, the city of Belgrade will be close to crashing down completely" Brnabic said.

"The third reason is if we go for complete bans, our people will get used to it being the only way, and this will surely last longer than the next year. We have to learn to work and live together somehow, in some kind of reality," she concluded.

Brnabic announced that a new laboratory will be opened in Nis.

"Patients from Belgrade will have to go to Sabac and Cacak"

Goran Stevanovic, the director of the Infectious Diseases Clinic in Belgrade, said that a third of the patients who come to that institution urgently need hospital treatment and the use of oxygen.

"That is the reason why our current hospital capacities are maximally stretched," he noted.

As he warned, if we act as if the coronavirus is gone, we will be in trouble and we will have all the capacities filled.

"The plan is to open a COVID hospital in Cacak and Sabac, if the capacities in Belgrade are filled, we will have to send those patients to Cacak and Sabac for treatment," he said.

It should be reminded that the President of Serbia stated on Monday that it is alarming in Belgrade because over 80 percent of those infected with the coronavirus are in the capital. He stated that the curfew in Belgrade will most likely be re-introduced, but he also emphasized that he would listen to the words of experts, i.e. members of the Crisis Staff.

The mentioned Crisis Staff, that is, its members, are of the opinion that we should first try with even more restrictive measures to fight the coronavirus, and that the return of lockdown in Belgrade is the last resort.

Due to the possibility of introducing curfew, protests began on Sunday evening, but also on Tuesday. However, they escalated into clashes with the police, burning of containers, breaking of state property...

Previously, an emergency situation was introduced in Belgrade, and later on, in 19 municipalities.

By the way, the number of examinations in COVID dispensaries in Belgrade only yesterday amounted to 3.096, the Ministry of Health told Tanjug.