Brnabic: "It is too early to declare victory; We are ready for the second wave"

"It is early to run the victory lap, the virus is still here, but we have a significantly smaller number of patients, about 1%," Prime Minister Ana Brnabic said 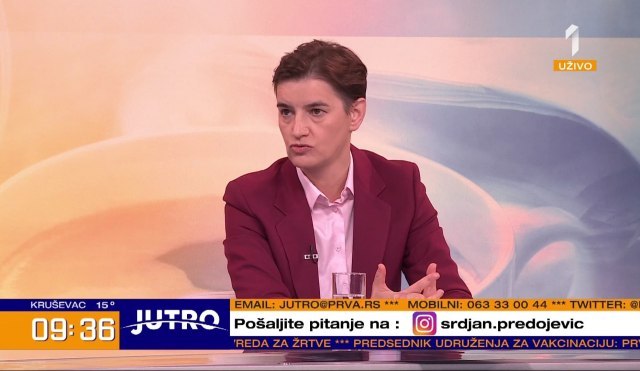 "Today, we have approximately 40 to 100 cases a day. The situation in hospitals is such that hospitals are slowly returning to normal work," the Prime Minister added.

As she said, the situation on the overall territory of Serbia is being monitored and the state is reacting in a timely manner.

"It is important that we have prevention and precautionary measures, wearing masks indoors, keeping distance and regular hand washing," Brnabic explained.

She said the recommendations were sent to employers to protect workers.

When it comes to border crossings, citizens do not need any test.

"I think that the decision to open the borders is timely," the Prime Minister added when asked about the opening of all border crossings with Hungary.

As she said, the epidemic in Serbia is still going on. "It takes 28 days without new cases to declare the end of the epidemic," Brnabic said.

The Prime Minister said that she expects that all maternity hospitals will return to the regular regime soon, even though they all worked during the state of emergency.

"We are preparing as if there will be a second wave. The government is doing everything we can to be ready if there is a second wave. That means that a sufficient amount of medicine is provided, primarily Chloroquine," Prime Minister said.

She said that production lines in the factories have already been started in Serbia for the production of protective equipment, masks, visors.

"We are ready, if there is a second wave, to welcome it much better than other countries, as was the case with this initial wave", the Prime Minister emphasized.

Brnabic also praised the functioning of the school via the Internet and television, as well as the enrollment of children in kindergartens during the state of emergency.

As she said, testing is free for all those who have symptoms, as well as those who are in large collectives, especially if someone is infected.

The Prime Minister added that antibody tests will be paid for, but that the price is still unknown.