The number of refugees that go through Serbia is still high, according to Info Park and other organizations assisting refugees in their transit through Serbia. 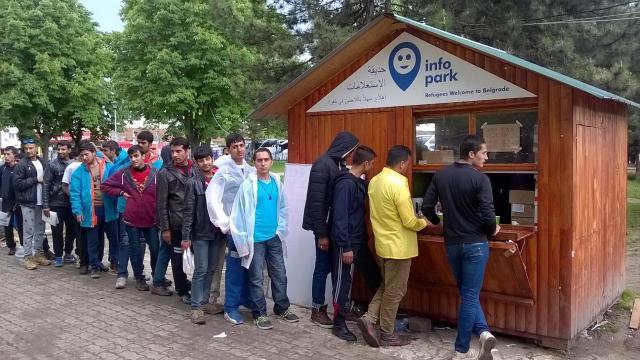 "We can say with big certainty that Belgrade is main center of transit through Serbia, where all refugees and migrants come that enter the country via southern and eastern border lines," Info Park said, and added:

"Only during yesterday (Wednesday), volunteers of Info Park had noted more than 200 new arrivals to Belgrade, along with several hundreds of already present refugees that are here waiting to find a way to continue their journey towards Europe."

Apart from a minor daily quota assigned mainly to the families of Syrian and Iraqi origin, that Hungarian authorities let into the transit center near the border line Kelebija, all others belonging to the nationalities who as economic migrants are forbidden to enter European countries (those from Afghanistan, Pakistan, African countries), the only way for continuing their journey is illegal trespassing via border fence that often ends up with arrests, and violence towards them, the network said.

Some of the refugees that are situated in Belgrade are those who were forbidden to enter Hungary, or were deported after being arrested, or directly turned away from the border, after getting caught in attempting to cross the border illegally.

"Although at the end of April, Miksaliste and Red Cross center got removed from the park near Bristol, where significant humanitarian support to the refugees was offered, other organizations that currently work in the vicinity of transit zones in Belgrade had established new regimes of work, with additional capacities for offering assistance," Info Park said.

They added that in cooperation with other organizations distributes between 600 and 800 hot meals, or dried fruit packages, tea, coffee, water, biscuits.

"The B92 Fund and the Trag Foundation, Refugee Aid Serbia (RAS), the Divac Foundation, the Humanitarian Center Novi Sad, the Evangelistic Church, Praxis/NRS, the Center for Integration and tolerance, and other organizations had taken over the care for the refugees," Info Park said.

In addition, several international health organizations are offering their services round the clock, such as Doctors Without Borders, Doctors of the World, RMF and others.

The structure of the refugees for the last couple of days is predominantly composed of Afghani citizens, while there are less Syrian and Iraqi families with children. They are mainly coming from Macedonia, via Preshevo, while smaller part comes from Bulgaria, via Stara planina, according to Info Park.

Most of refugees spend the night in asylum camp in Krnjaca led by the Commissariat for Refugees and Migration of the Republic of Serbia. Two buses per day drive all interested to the premises in Krnjaca where they can spend the night and get something to eat. For the last couple of days, Krnjaca accommodated around 300 people, out of which one third expressed the intent to seek asylum that will allow them to stay longer in the camp, as well as provide hot meals.

This is a significant growth compared to the situation several weeks before when the camp accommodated around 100 refugees on a daily basis. According to the information from the mentioned Commissariat, this facility has satisfying capacity for covering accommodation for the larger number of

refugees, such was the case last week, when the camp accommodated more than 600 people for the night. Most of migrants still decide to spend the day in town, awaiting information on the new routes towards Europe.

According to the testimonies of the refugees and Info Park volunteers, main reason for daily stay in park is the exchange of information on continuing this journey, as well as the presence of the human traffickers, who offer them illegal enter into Hungary. Every day, in the afternoon and evening hours, approximately the same number of refugees leave Belgrade taking buses to Subotica. It is assessed that at any moment, there are at least 500-600 people in transit in Belgrade.

After the last bus that heads to the camp in Krnjaca at 7.00 PM, parks are mostly empty, while the refugees that arrive to Belgrade during the night are driven to the camp with the assistance of the staffers of Info Cenar and Praxis.

Info Park and other organizations offering assistance to the refugees in transit, appeal to others in providing food, drinks and other necessary goods, as well as clothes and hygiene packages.