Serbian President Aleksandar Vučić arrived in Tirana, where he is participating in the Summit of the leaders of the European Union and the Western Balkans. 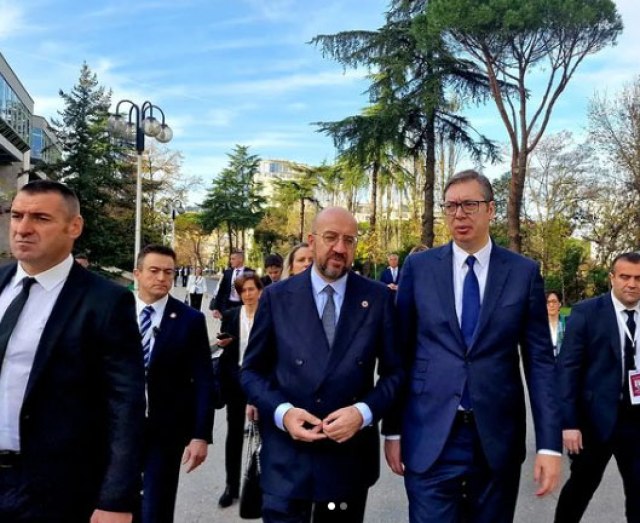 A sincere meeting with Macron

Vučić also met with the President of the Republic of France, Emmanuel Macron.

"A cordial meeting with Macron, with whom I exchanged opinions on current global issues, but also on the connection of the Western Balkans with the EU and the European road of our country. We also discussed regional stability, and I reiterated Serbia's consistent commitment to preserving peace and dialogue, as the only way to resolving all issues," reads the photo's description.

Vucic and Orbán: "Great conversation with a friend"

President of Serbia spoke with the Prime Minister of Hungary, Viktor Orbán, on the sidelines of the Summit in Tirana.

"An excellent conversation with a friend about joint plans and projects, global trends and the development of the situation in the region, with the agreement to meet again as soon as possible," he wrote.

The most pleasant talk

In Tirana, Vučić also met with the Serbian member and chairperson of the BiH Presidency, Željka Cvijanović.

"The most pleasant conversation," he briefly wrote on Instagram.

Vučić and Michel on issues of interest to Belgrade and Brussels

After the meeting with Rama, there followed the one with the President of the European Council, Charles Michel.

"I talked with the president of the European Council about all issues of interest to Belgrade and Brussels," he wrote.

With Rama about the Open Balkans

"I was talking to my friend Edi Rama about the Open Balkans initiative and our common issues," he wrote on Instagram.

"I thanked for 165 million euros in aid to the Serbian energy sector and discussed all current issues between Serbia and the EU," Vučić wrote on Instagram.

Center of Tirana blocked; a large number of police officers on the streets

The city center is closed to traffic because of the Summit, but also because of the protest announced by the opposition Albanian politician Sali Berisha from the Democratic Party.

A large number of police officers are deployed in the city, and snipers can be seen on the roofs of the Congress Palace.