In his address today, President of Serbia, Aleksandar Vučić, spoke about everything that happened in Brussels during the dialogue between Belgrade and Priština. 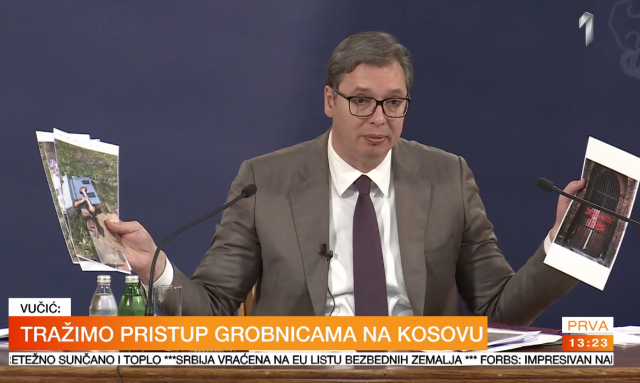 "I wanted to inform the public about everything that happened in Brussels," the Serbian president said at the beginning, adding that there would be a session of the National Assembly on June 22 at which he would "speak thoroughly about absolutely every issue that is crucial for the situation in Kosovo and Metohija".

As he further states, the dialogue continued yesterday under the auspices of the EU, and that is the strangest phase.

"I said this because I can confirm that those who came on behalf of the Pristina side wanted to force Serbian representatives to leave the conversation. Everything they did, asked for and said meant that they wanted to avoid the talks," he said, adding that the only topic that was discussed was the issue on missing persons.

"The last location is Kiževak and the remains of 11 bodies were found. Two bodies were determined by DNA analysis to be Albanians. We searched for several locations. One is Košare, and we did not receive any information for Lapušnik 2013, Dojnice 2013, Javor, Suva reka 2020...", he adds.

However, he says, they were asked to inspect Kosare location and we got no answer - except that it was promised that the terrain would be searched. "We were looking for Lapusnik back in 2013," he added.

"When I asked for it, and I am grateful to the EU representatives who did well, the head of their negotiating team said he would not allow the excavations so as someone might think that Albanians were committing crimes," the president explained, adding:

"We have already initialed with Hoti how it should look like, and now, as a key argument of the Albanian side, we have received that it is not the essence, but that Veljko Odalović should be replaced."

The president believes that it is the audacity and ruthlessness of the Albanian side, as well as that they called Odalović "Goering".

"Maybe I shouldn't have reacted that way, maybe I insulted Kurti, but I responded in a more brutal way and I can't say that I repented, I was surprised that someone could use such a dictionary," he added.

He says that Kurti repeated the need for Kosovo to be recognized by Serbia ten times and he asked several times "when it will happen", so he received the answer to that - "Never". "I guess he thought we had to accept what they said," he said.

According to Vučić, they said that Serbia provides arms because of Kosovo, for which he didn't feel needed, he adds, to deny.

As he further states, they wanted to make a Declaration of Peace, but Vučić adds, only two independent states can do that.

"The next requirement is for CEFTA to be SEFTA, so that they can include it in their symbols and thus be a 'Republic of Kosovo,'" he says. The meeting began by insisting that the obligations towards Serbia be fulfilled in accordance with what was signed. "We begged them to fulfill the obligation for the Community of Serbian Municipalities," he says, but Kurti will not accept the agreements signed before February 14, when he won the elections.

As Vucic says, "an impossible atmosphere has been created and dialogue was impossible. It is not good for us because this kind of lack of constructiveness could lead to an escalation of the situation in Kosovo. I know how many irresponsible people there are in Pristina, who can cause all kinds of problems. That is why I called on the international community to prevent "any incident, anything that could endanger peace and stability in the region".

He says that they perceived as provocation on our part holding a liturgy in Serbian churches that received land during the rule of Slobodan Milosevic, and that Serbia should refrain from that.

"I was speechless when I heard that," he says, and asks, "Isn't it a provocation to write graffiti and urinate in a religious ceremony?"

He says that when you hear that, you understand what it is about and why Decani is endangered and why Serbs feel threatened. He emphasizes that it is important that we talked in any way and that we show determination to resume negotiation process.

"We will try to solve the problems by talking". More details will be presented in the parliament, Vucic added. The KLA archives were asked to show the graves of Serb civilians and soldiers, but now the Albanian side claims that it does not exist.

"I am proud of the behavior of the Serbian delegation. Did I exaggerate - possibly, yes, and I will see that maybe in the future I will try to lower my voice and not react to provocations in such a way," Vucic emphasizes. In the next period, he would address the Parliament on June 22 "in detail and thoroughly about every issue that is of key importance for the situation in Kosovo and Metohija".

He showed photos of the church where graffiti was written: "Christ hates Serbs", as well as photos of destroyed Serbian monuments and all assaults on religious buildings.

Vaccination: It's a shame

When it comes to vaccination in Serbia, the president states that there is a vaccine, and appeals to citizens to be vaccinated.

"We have all the vaccines, we can distribute them to everyone. It is a shame that some countries have a higher percentage of vaccination than we do, and they are still struggling with vaccines, and that we have a problem due to some conspiracy theories," Vucic said.

Next meeting with Pristina?

Asked if he expects anything from Pristina, Vucic states that Borrell was correct, and that he expects someone to talk to Pristina before the next meeting.

"I have no words of objection. I want to believe that they (the Pristina side) will appear and that it will have a more constructive attitude towards the conversation itself," he added. When asked what is Pristina's response, and what is Brussels' response to the ethnic cleansing of Serbs in Kosovo and Metohija, Vučić answers:

"Their answer is that we are fascists who committed genocide."

"Both threats are serious", he said when asked if there was a greater danger of a coronavirus pandemic or problems in Kosovo and Metohija.

He states that all this endangers the economy. He points out that Serbia will never recognize Kosovo and that this speaks of the strength of the Serbian state.

As he further states, there is no philosophy that Serbia will not allow endangering the security of Serbs in Kosovo and Metohija.

"Today, when the memories on August 4 and 5 are close, and when you look at the recordings of the people coming to Serbia on tractor trailers - is there anyone whose heart doesn't beat stronger? Imagine Serbia experiencing that again. That would be the end of our nation's existence," he added.

That is why, he says, he prays that no one plays with it.

"It is our job to react diplomatically, and hope that no one will think of trying to use weapons to expel Serbs from their centuries-old hearths".