In an interview with "Dnevni Avaz", after signing agreement in Washington, Vučić spoke about the reactions in the region, the attacks of the opposition, Russia. 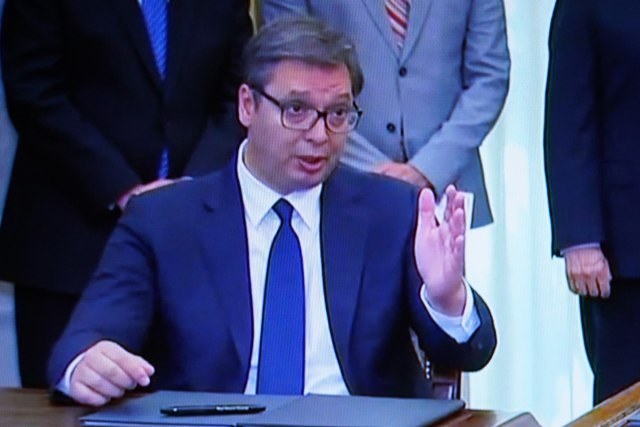 When asked by journalists what was really signed in Washington, the President of Serbia, Aleksandar Vučić, said that something was signed that is an exceptional thing for Albanians, Serbs, but also for Bosniaks.

"In a modern society, people trust their emotions more, their fan passion, and less their facts. I don't want it to be like we were outplayed or won, because I don\'t think we should have a hostile relationship. It\'s important to have a lot of good things. "After a long time, Pristina has agreed to participate in what we call \'mini-Schengen\', which is a remarkable thing for Albania, for Serbs, but also for Bosniaks", Vucic said.

"If, for example, at all border crossings where we have phytosanitary inspections, when you make trucks wait for you 24 hours less than is the case today, then you make serious savings in operating business. Then you help the economies of your countries and you can show how much your economy is making progress. "If you issue a work permit for Tirana or Pristina or Skopje, those work permits will be valid in Belgrade as well," he added.

"These are thousands of things that make life easier for ordinary people, which give them the right to hope that they will live in peace. It will stabilize the entire region. Not to mention that we have agreed on significant infrastructure projects, such as the Nis-Pristina highway", Vucic says.

"Also, the railways that we have almost forgotten. We will reconstruct the existing Nis-Pristina road, and after that we will have complete infrastructure for passenger and freight traffic, all the way to Tirana and Durres. What is even more important for us is that we expect that in the next month or two, for the office of the American Development Fund in Belgrade to be open", Vučić said.

When it comes to the political part of the agreement, and especially about the embassies of Serbia and Kosovo in Jerusalem, Vučić says that one thing is the most important:

"What we didn't accept was mutual recognition. But what was done there was that they actually wanted us to say that it was okay for us for Israel to recognize Kosovo\'s independence. We didn't want to participate in that. We said that Israel is a sovereign state, has the right to do what it wants, and from our side we have sent a message to Israel that is very clear. I think we have made a very good agreement, with the fact that when you do it with the Americans, then at least you know there will be influence on the other side, to put those things into practice. I think that it is very important for us and we have to put ourselves into that perspective. Economic aspect is crucial for us," he said.

What about regional issues?

"I will never give up on the idea that I think is healing for the whole region, which I think is the best, and that is \'mini-Schengen\'. That is our connecting with others in the region. Whether they will accept us into the EU is a question, and what is it that we can do for ourselves, for our peoples, to build a structure... One of the projects is very important for us, about which we are talking all the time with Europe, and about which we will additionally talk with the Americans, it is the railway Belgrade - Sarajevo", he said.

"We are building our section of the highway, one towards Bosnia-Herzegovina, and soon we will build another, because it has been neglected for decades. It is as if someone wanted Serbia and Bosnia-Herzegovina to always be separated, among other things - in a bad way. We will further discuss the Belgrade - Sarajevo railway, which I think is much more realistic than some too expensive projects, which are related to other countries and other parts of our region", the President of Serbia added.

"And now let me comment on whether I was sitting on this or that chair... I just want to tell you - imagine the president of any of our small countries in the region getting a chance to enter the Oval Office, to talk bilaterally, alone with the president of the USA and that, when they put a chair in front of him, he says: \'I\'m sorry, I\'m not interested in this chair, now I\'m going to kick it nicely, so I\'m going to go out and I really care about the USA, because it\'s very important to me for my vanity there will be a chair", Vučić points out.

"Of course it didn\'t occur to me. I acted responsibly, behaved politely and had the honor and opportunity to have a great conversation with Donald Trump. I would always say that again, because it is my obligation to do everything I can for my country, for Serbia. Furthermore, I tried to make everything that we proposed be in the interest not only of Serbia but also of everyone else in the region," he replied.

You presented a number of specific benefits for Serbia and the region, which have been agreed. Why is it far less talked about than the chair you were sitting on?

"Do you think that, after eight years of someone\'s rule in Serbia, it is possible to have 60 percent of the vote or always more than 50, without people noticing someone\'s work? It is easy to say \'you are ugly, Vucic, and you are fat\' or \'You shouldn\'t sit in that chair\'. It\'s always easy. But I\'m not interested in that. I\'m interested in what the result of some work is," Vucic says.

"And sometimes I\'m ashamed to answer those who deal with such nebulae, nonsense, that I have embarrassed them, said something wrong in English... They cannot find any fault with me. Well, I mastered Russian during my term, now I\'m learning German. And again, something will bother them. But you can\'t deny work and results. That\'s why I\'m proud of my work and I came back from Washington much happier than I left," Vucic pointed out.

Was there any talk of BiH in Washington? Many warned that there could be trade to the detriment of BiH, and Milorad Dodik brought you certain documentation...

"I did not listen to that when Mr. Dodik was in Belgrade and we didn\'t tell him what would happen in Washington. He brought me a document concerning the violation of the Dayton Agreement. We did not discuss anything in individual meetings. Washington talked about the region as a whole, but primarily, about the relations between Belgrade and Pristina," the President of Serbia explained.

How do you comment on the reactions from Russia, like the one of the spokesperson of the Russian Ministry of Foreign Affairs, Maria Zakharova?

"I\'ve been listening for eight years to how we are Russia\'s servants, how we\'re like this, like that. No! We take care of ourselves and our interests. Russia is our friend. We have good, great relations with Russia. But, you know, we represent our small country from the Balkans, we are proud of Serbia, we love our country and as you have seen, to something that happened that we did not consider polite and appropriate, we responded strongly. And I am grateful to the Russian leadership who immediately apologized. You saw the reaction of Sergei Lavrov", Vucic said.

"Our job is to preserve independence, freedom, and that is above all important for freedom in decision-making, and not in how much you will shout, insult someone, threaten... I am satisfied that Serbia is independent and free in its own decision-making", he adds.

How do you comment on the results of the elections in Montenegro and the events after that?

"I do not want to comment. I did not make any statements. I am sorry for the great tensions. I am sorry that some people always find Serbia in everything when it is necessary. But, to be honest, I am not interested in responding to such questions. We want good cooperation and I believe that we will have very good cooperation with Montenegro, whoever is in power today and whoever is in power tomorrow," the President of Serbia concluded.