Some call me a warmonger, others a traitor. Decision on Montenegro within 24-36 hours

For some, I am the aggressor and a warmonger, and for others I am a traitor, without anyone explaining to me what I had betrayed, Serbian President Vucic stated 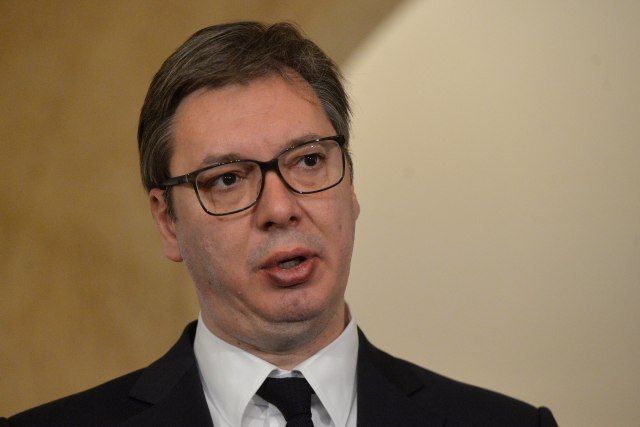 I do not want to be like them, I want us to be good neighbors, Vucic commented on the situation in Montenegro, adding that Kosovo and Metohija are the territory belonging to our country, but Montenegro and Croatia are not and that the integrity of other countries should be respected.

It is my desire and obligation to be with our people in time of trouble, Vucic said, adding that in the next day, day and a half, he would make a final decision on whether to spend Christmas Eve with the Serbs in the north of Montenegro.

"Nothing more than that," was, as he said, his idea.

The greatest Orthodox holiday, he says, is a time for showing forgiveness, reconciliation, a time to show unity as a people, "without insulting or provoking."

He has no plans to make political speeches.

"The bottom line is that we understand that we live in different countries, that we respect those states, but it is important that we belong to the same nation, that we have to show unity. The ideal time to show it is right now”, he emphasized.

"In any case, it is my desire and intention to be together with our people when it is hard for them. The President of Serbia's role is not to tour the stadiums, halls, to rejoice in our achievements in sports, and to boast with other people's achievements, but to solve difficult and important problems, to be with our people in times of need", he underlined for TV Pink.

Vucic said he was surprised to see how hysterical campaign was run by numerous media outlets against his arrival to Montenegro.

He recalled that he had also celebrated Christmas at the Zagreb Orthodox Cathedral, as well as in Gracanica.

"It has never been easy for our people in Gracanica and Zagreb. I belong to the Serbian nation and I want to show that kind of unity", he stressed.

Vucic said that his departure to Montenegro was neither an official nor a working visit to Montenegro, but that he would certainly show respect for the state of Montenegro and announce his intentions and how long he would stay.

As for the reactions from Montenegro, Vucic said that there were no obligations for private visits to be announced.

He emphasized that only through wisdom, remembrance and the power of our unity can we win, not with hatred.

"We are brothers", as he pointed out, "and we will always have to live together because we have no one closer".

"I do not want to respond publicly to insults or speak against Bishop Amfilohije, whatever he said about me"

"I do not want to respond publicly to the insults, or to speak against Bishop Amfilohije, whatever he said about me, but to be with my people in Montenegro, and all that I had to say I said before the SPC Council, in the face, in the manner of honorable people", Vucic said.

"And to speak now against Bishop Amfilohije or anyone else, whatever he says about me, I will not say a single word. I want to be with my people, not fight for the victory of my vanity over those who are today persecuted in Montenegro", Vucic said.

Vucic also said that Christmas Eve is time for conciliation and forgiveness and that he only wants to strengthen the unity of the Serbian people.

"The attacks on me commenced when Serbia began to gain power"

The attacks on me, that I was the aggressor, the warmonger, the traitor and that I would surrender Kosovo and Metohija, commenced when Serbia began to gain power and ceased to be a punching bag for big powers", Vucic said.

Vucic said that for the eighth year he has been listening to him being accused of all this, as well as being a man who does not want to apologize and that he is not as good as Boris Tadic and others.

"For others, I am a traitor, and what have I betrayed?", Serbian President enquired.

Serbia, he says, is today helping Serbian institutions in Montenegro, helping the people in Kosovo, helping the Republika Srpska more than ever before, and asked why he was a traitor then.

He emphasized that he holds special respect for Patriarch Irinej and asked him for his blessing to go to Montenegro and spend Christmas Eve with the Serbs.

"I visited the Patriarch, and presented him with this idea, and he gave me his blessing as he was happy that I think of the Serbian people at a difficult time. Then, we just mentioned that there was a possibility of my going to Montenegro", Vucic said.

President Aleksandar Vucic said that if there was a reason for verbal conflict in the Parliament of Montenegro because people were rebelling against life-changing legislation, there was no reason for an incident in the Parliament of Serbia to take place, and that Dragan Djilas ordered the two leaders of Dveri to enter the session, make the incident and harm Serbia, without any cause.

Asked if the message "where the Serbs are - there are incidents" is being sent, Vucic said that it is certainly not a pretty picture, although such incidents also happen in democratically more advanced countries.