President Aleksandar Vucic said, on the eve of a meeting in Berlin, that he "doesn't know how, and what" he may talk about with representatives of Pristina. 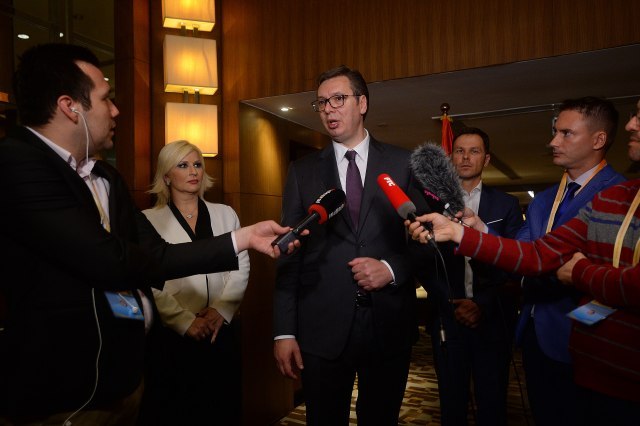 The meeting, organized by France and Germany, will be held on April 29. And on April 24 in China, where he is attending the Belt and Road summit, and about to meet with Chinese and Russian presidents - Vucic said:

"I must say that I do not understand... I've always respected Chancellor Angela Merkel and President Emmanuel Macron, and I am sure they are smarter than me, and that they would think of something. At this moment, I do not understand what about, and how, I should talk to Pristina."

The president said this when asked about Pristina's - i.e., provisional Kosovo institutions' - recent moves - and whether they would end up not allowing Serb representatives to run in their own constituencies - that might render the upcoming meeting in Berlin "pointless."

Vucic said that the fact that the Kosovo Central Election Commission has not yet confirmed the candidates from the Serb List - in local elections for mayors of four Serb municipalities in the north of Kosovo - represented "an abolition of democracy, that no one in the world has reacted to."

Vucic said he would ask Merkel and other leaders in Berlin - "what does one call prohibiting somebody from running in an election because you don't like their policies - even though there is nothing illegal or violating someone's human rights about them?"

Noting that Kosovo will be one of the key issues during his conversations in Beijing with presidents Vladimir Putin and Xi Jinping - Vucic added that he was shocked by the arrogance of Pristina, whose Central Election Commission failed to confirm the candidates of the Serb List for mayors in the four Serbs municipalities in the north of Kosovo and Metohija, even as late as of Wednesday.

"These are incredible things, I'm shocked that somebody's arrogance and insolence can go quite this far. You don't go there," Vucic said in conversation with Serbian journalists in Beijing on Wednesday. He added that this was tantamount to "abolishing democracy" - that "nobody from abroad has reacted to."