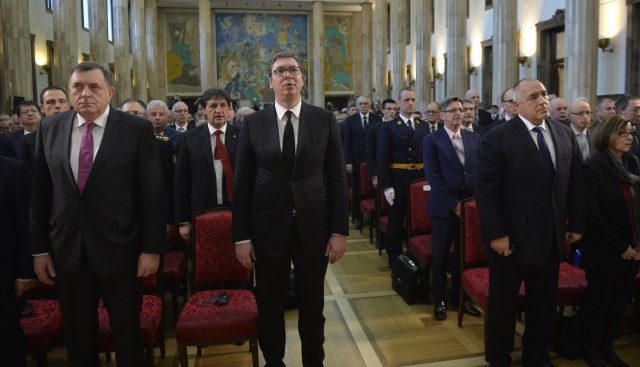 The ceremony in the Presidency was attended by ministers Ivica Dacic, Nebojsa Stefanovic, Zlatibor Loncar, Aleksandar Vulin, Vladan Vukosavljevivic, chairman of the Presidency of Bosnia-Herzegovina Milorad Dodik, and Bulgarian PM Boyko Borisov, who is among the recipients.

Borisov received the Order of the Republic of Serbia on a sash.

The mayor of Corfu, Konstantinos Nikolouzos, received the Order of the Serbian Flag, third class.

The Gold Medal for Merit was given to Holocaust historian Gideon Greif.

The Sretenje Order, first class, was given to the National Museum in Belgrade, which is celebrating 175 years since it was established, the Faculty of Agriculture of the University of Belgrade, the Kralj Petar Prvi elementary school, which is this year 300 years old.

Addressing the ceremony, President Vucic said that today we need the courage not to succumb to external pressure and defend the right of the people to survive, and wisdom to make the best decisions for the future of Serbia.

"Today, as well as 215 years ago, great challenges and the central values ​​that we are guided by are the same - freedom, peace and equality, and love for our Serbia," said Vucic.

He recalled that on this day, 215 years ago, the Serbian rebels set off to fight for freedom, led by Karadjordje (Djordje Petrovic).

"It was the beginning of a long and hard road to ensure freedom, peace, equality, but also to build the modern and successful Serbian state. In the past 215 years we have created a state, whose results are all the greater if we know that it was not a few times that we were tripped, blocked, , set back - and sometimes they tried to destroy us - sometimes this was done by our enemies, and sometimes we participated in it ourselves," he said.

Vucic said that the values ​that guided the rebels were guided by was the first constitution (of the modern Serbian state), adopted in 1835, that was "modern, contemporary, remarkable for that time, which abolished feudalism, guaranteed freedom and reined in absolutist power."

"For a short while - but that was enough to continue the fight for a modern and free Serbia and to show everyone in the whole world that the sun of freedom shines strongly over our country. We are on this path also today, in front of our society and the state there are major challenges. Today, as well then, the central values ​​- freedom, peace, equality, and more than anything, love for our Serbia," said the president.

As he stressed, today we need Karadjordje's courage and determination more than ever, "but perhaps more than that, the brains and wisdom of Milos (Obrenovic)."

"The courage not to give in to many pressures from outside and to defend the right to survival of our people, the wisdom and cool heads to bring the best decisions for life and the future of Serbia," Vucic said.

The recipients of today's accolades have with their work, selflessness, energy and sacrifice immensely contributed to Serbia remaining committed to its values ​​to be better, more successful, happier and more modern, said Vucic, adding that for this reason.

"I congratulate today's holiday to all citizens of Serbia the holiday, with the message, Long Live Serbia!," Vucic concluded.