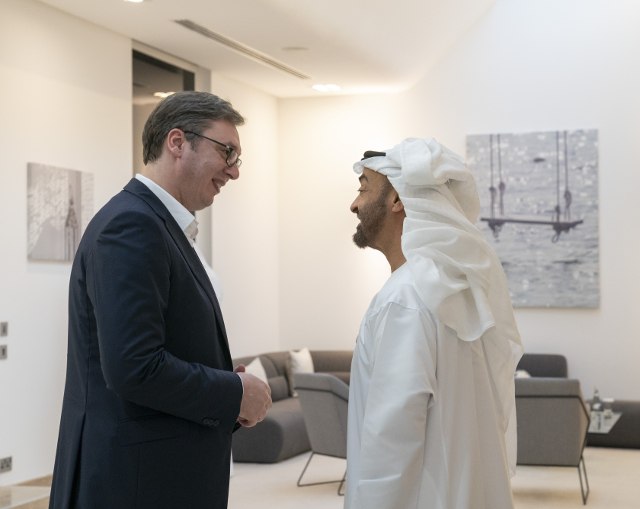 They talked about ways of strengthening the cooperation in the economy, trade and development, as well as about current regional and international affairs of mutual interest, and agreed to work together on improving the economic and, in particular, investment partnership between Serbia and the UAE, Tanjug reported.

Vucic said that cooperation with the UAE was of vital importance for Serbia, while he and the crown prince agreed to work together to develop a bilateral economic partnership, with a strong emphasis on investment, Beta said.

The two officials were also pleased to see the Belgrade Waterfront residential complex grow, and that bilateral ties were strengthened through Etihad's investment in Air Serbia.

They also discussed new projects in energy, agriculture and education.

The Serbian president said to the UAE crown prince that Pristina's insistence on exorbitant taxes on imports from Serbia and a new Kosovo army had made Serbia seriously concerned about the future of the Serbs in Kosovo and Metohija.

Vucic asked the sheikh to use his influence to ensure support to a peaceful solution to the problem, a press release from his office said.

Speaking to reporters after the meeting, Vucic said that his host "knows the situation in our region excellently - but for the first time he said we should just avoid any kind of conflict and find a solution about Kosovo with the Americans and Russians, that Europeans, too, will then be the ones who will accept it.

"He understands how important it is," said Vucic.