Serbian president says he is "obsessed with Kosovo"

“I’m obsessed with Kosovo. Without resolving the problem everything I have achieved so far won’t be sustainable," Aleksandar Vucic has told the Financial Times. 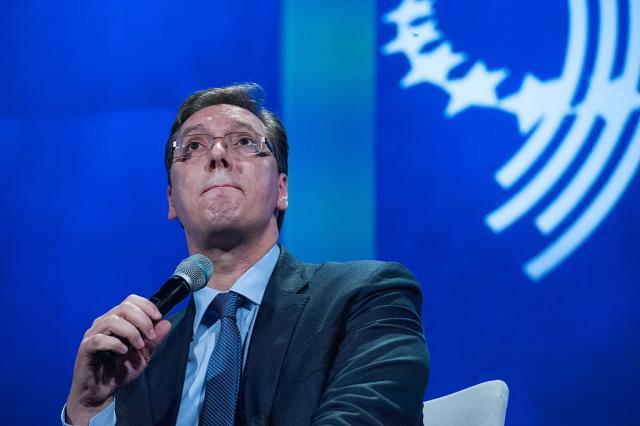 "The first crisis will kill us," he added.

Tnjug is reporting this on Tuesday, citing the daily's interview with Vucic, and its analysis of the position of Serbia and Vucic in the context of solving the Kosovo issue, and of the country's EU membership bid.

According to the article, published on FT's website, "to qualify for EU membership, Vucic must first resolve the disputed status of Kosovo" - while EU officials "want Vucic to sketch out his proposals in the coming months to kick-start talks with Kosovo’s leaders."

The FT also observed that most Serbs "still regard Kosovo as the birthplace of the nation and the Serbian Orthodox Church, and remain staunchly opposed to its secession" - as the 28-member EU is "not imposing its own solution because Spain and four others refuse to recognize Kosovo’s independence, largely for fear of setting secessionist precedents for their own countries."

Serbia’s foreign and defense ministers have openly backed the idea of partition, the article continued - "but this is a non-starter for western powers who fear it will open a Pandora’s box of border disputes in the region."

"Nor are they likely to backtrack on independence, as some Serbs imagine," writes the FT.

"The most likely settlement would involve autonomy and power-sharing arrangements akin to Northern Ireland for Serb-dominated areas, in return for recognition of Kosovo’s statehood, but even that would be a step too far for many Serbs and would still face the hurdle of a referendum, where Vucic could expect fierce resistance from several quarters, including the Serbian Orthodox Church," the newspaper states.

The head of the SPC, Patriarch Irinej, is then quoted as telling its reporter, "We are not going to give Kosovo away at any price. We are European. We are in favor of joining the EU but not if Kosovo is the price.”

An expert on Kosovo who refused to be named "on security grounds" is quoted next as saying that Vucic "could still prevail in a referendum, given his political dominance and grip on the media."

According to the FT, Vucic today "bcks EU membership as a catalyst for change, final proof that Serbia has escaped the nightmare of the Milosevic years marked by fanatical nationalism, the NATO bombing of Yugoslavia, hyperinflation and rampant warlords."

"Another war would ruin this country and destroy the future of the Serbian people forever," said Vucic.

And while Vucic was President Vladimir Putin’s guest of honor at the Victory Day parade in Moscow on May 9, and "starts his working day at 6:30 am with a Russian language lesson" - he "rejects the notion that he could become a 'fifth column for Putin in Europe'."

Vucic is quoted as saying that he has always been clear with the Russian president that “Serbia remains on its EU path."