That gang of terrorists - Vucic reacts to events in Kosovo

Terrorists dressed in special police uniforms of a non-existent state of Kosovo wanted to show they can occupy northern Kosovo, says Aleksandar Vucic. 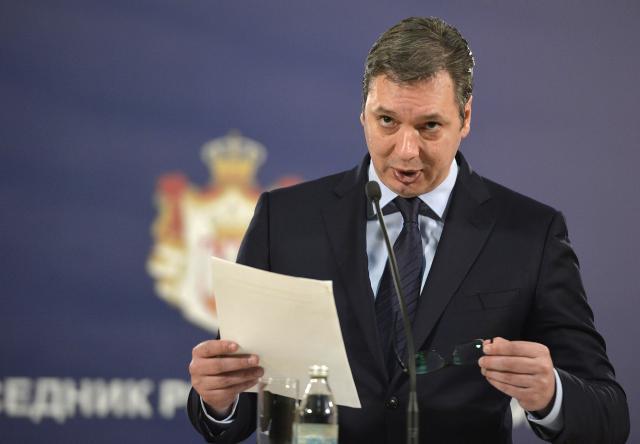 They were doing this with the help of the EU rule of law mission in Kosovo, EULEX, he continued - "for every two ROSU (special Kosovo police) vehicles, there were two EULEX vehicles."

The president said this while addressing media in Belgrade late on Monday, after the head of the Serbian Government's Office for Kosovo and Metohija Marko Djuric was arrested in Kosovska Mitrovica and then taken to Pristina, before being turned over to Serbian authorities.

Speaking after a session of the Council for National Security, called in the wake of the incident, Vucic said Pristina's accusation that Djuric went to Kosovo "illegally" was not true - instead, "he sent an announcement 75 hours prior to his departure for the province, although according to an agreement, this should be done 24 hours before the visit."

The Serbian government announced on its website that the president "explicitly explained the procedure that is applied when our officials go to Kosovo and Metohija, and added that Djuric announced his visit to the provisional authorities in the province three times."

Vucic added that this procedure is "not about asking for permission, but about informing."

He also revealed that he spoke with Djuric, who will be admitted to a medical institution because he has "certain problems."

"Interesting that (Behgjet) Pacolli said Djuric and (Aleksandar) Vulin are not allowed to enter Kosovo because they 'incite hatred'. Has the terrorist, bandit state decided it can come up with (the crime of) verbal delict? Is it banning somebody just because they don't like them? That's not written anywhere in the agreement," Vucic said, and added:

"Albanian terrorists wished to show the power they have and the support of the West. I thank them for that information."

Speaking about the initiative of the Serb List to leave the Kosovo government, the president said he would not be deciding for them, but said they should make their decision with a cool head, and added that many Western ambassadors called the Serb List and pleaded with them not to leave from the government.

On Tuesday morning, it was reported that the Serbs would leave the government in Pristina.

Speaking last night, Vucic pointed out that he "refused to talk to many ambassadors".

"People from Serbia should not be scared, we are not as weak as some people think, only thing is we do not show strength. And they... congratulations to you, great heroes, you are very strong. Still waters run deep, you know that I love what is written at the scoreboard at the end (of a game), and not getting the red (card, be sent off) in the 29th minute," Vucic said.

Another question, he continued, was for EULEX and why Milorad Zajic, a Serb recently detained in Kosovo, was arrested.

"On Friday, I asked the EU why Milorad Zajic was arrested? Why did you arrest Bogdan Mitrovic? Why are you harrassing Serbs? I received no answer, because it is not a question for EULEX," said the president, adding that it was "their business to occupy the north of Kosovo."

"While some of the representatives told us 'be calm, we will talk to our protégés', they are starting an action where this terrorist gang throws a stun grenade and beats other people, not only Marko Djuric. The footage of his being brutally beaten we will show the public. These terrorists arrested Djuric, I suppose because he wrote them three times, or maybe they don't like it that Marko does not recognize their terrorist state," Vucic said.

As he pointed out, "this gang of terrorists took pictures with him as a trophy and took him through the streets."

"They don't know that they've humiliated themselves. Those terrorists captured the tortured Marko Djuric, they were taking him with them, while other terrorists whistled at him. Djuric survived, but we will not let this pass. Everyone who took part in this will be held responsible before Serbia's state organs. The two persons of Serbs nationality who helped the Albanian terrorists abduct Marko Djuric - everyone will answer to Serbia," said Vucic.

During his address to the media, he specifically addressed citizens in northern Kosovo.

"I call on citizens in the north of Kosovo to be calm and peaceful because Albanian terrorists will not be able to take any action against them, neither they nor their Western partners. Serbia will not threaten anyone, but will not allow anyone to destroy its people either. We will now allow anyone to threaten our citizens' safety."

Vucic said that it was now "pointless to talk about the Brussels dialogue" and added that "we will wait for years for (Pristina) to fulfill the obligation regarding the ZSO (Community of Serb Municipalities)."

"They have no intention of fulfilling that," Vucic concluded.

Asked why his general secretary Nikola Selakovic, who was also in Kosovska Mitrovica yesterday, was not arrested, Vucic said that this was the best indicator that the decision to arrest Djuric was not according to any law, while when asked with whom he spoke after the events in Pristina, the president replied:

"I will say nothing about who I talked to, it would be easier for me to show you the list of those I did not talk to, and whom I refused."