President Aleksandar Vucic on Wednesday reiterated that recent statements made by Bakir Izetbegovic are "very complex, with far reaching consequences." 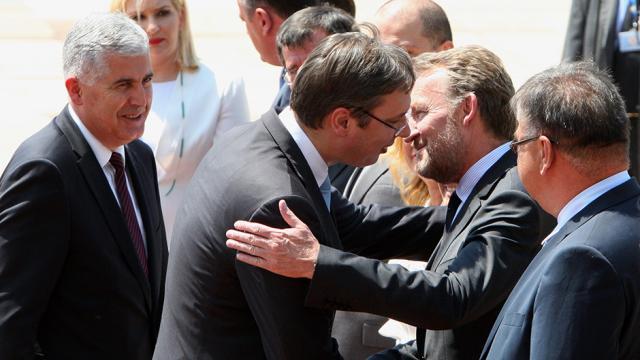 Vucic said this in Brussels, while speaking with reporters. On Tuesday, he made a similar assessment of the Bosniak (Muslim) member of the Presidency of Bosnia-Herzegovina's interview with Germany's Deutsche Welle.

Izetbegovic said that he "hoped" Bosnia-Herzegovina (BiH) would recognize Kosovo - Serbia's southern province where ethnic Albanians in 2008 unilaterally declared independence - a move that continues to be contested by Belgrade as a violation of the country's Constitution, territorial integrity, and sovereignty.

In addition, Izetbegovic said he "thinks that if the Serb entity in BiH (RS) were to declare independence, it would lose, hopefully politically and not militarily" - and also made comments about Serbia's southwestern area known informally as Sandzak, that has a large Bosniak minority.

According to Tanjug - Vucic on Wednesday "rejected the claims that he personally had overreacted, and that Serbia was to blame for the polemic than ensued (following Izetbegovic's interview)."

"The whole interview contains many significant elements - starting with the stance of the Bosniak member of the (BiH) Presidency toward Sandzak... to what means would be used to protect the territorial integrity of BiH - i.e., the military, war means - while on the other hand, a personal desire (of Izetbegovic) is being expressed for a part of Serbia's territory (Kosovo) to belong to someone else," Vucic said in Brussels, where he traveled to meet with EU foreign policy chief Federica Mogherini, and NATO's secretary general, Jens Stoltenberg.

Vucic continued by saying that he was "still in favor of analyzing this, and not reacting with a single harsh word."

"But - if somebody thinks those were insignificant, passing remarks - I think that somebody is mistaken," the president said.

According to him, there is "a pattern where some in our country always need to blame the Serb side, just as there is a pattern in a portion of the international community to always urge all sides to calm down - because they won't say who the guilty party is."

"I don't find we're to blame for anything, nor that we have contributed in any way. We are yet to react - other than repeating what we heard in the interview. You have not heard my condemnation, nor my assessment, nor my qualifications," Vucic said.

He stressed that Izetbegovic never, up until this point, in front of Serbian officials, spoke about his hope of Kosovo being recognized - nor about his claim that this should have already happened - nor did he ever mention internal relations in the Republic of Serbia.

Vucic then emphasized that there was "no Dayton Agreement for Serbia" - referring to the peace accord that ended the 1992-95 war in Bosnia-Herzegovina - but that this accord concerns BiH, while Serbia has "certain rights and guarantees" - and can, from that point of view, speak about BiH, "just as Croatia can, from the point of view of a guarantor of the implementation of the Dayton Agreement."