30K gather to honor Serbs killed and expelled from Croatia

In Serbia, August 4 is marked as Day of Remembrance of those Serbs killed or expelled during Croatia's "Operation Storm," launched on this day in 1995. 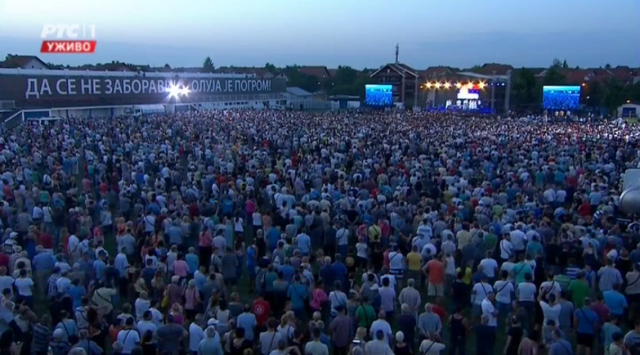 Croatia's military and police offensive 22 years ago, carried out with NATO's support - and that of Croat and Muslim (Bosniak) forces in neighboring Bosnia-Herzegovina - resulted in the expulsion of more than 200,000 Serbs, and the deaths of about 2,000.

On Saturday at noon, an air raid siren will sound in the entire territory of Serbia in memory of "Operation Storm" victims.

The central memorial event was held in Novi Sad on Friday evening, with Serbian Orthodox Patriarch Irinej leading a memorial service in front of more than 30,000 people.

Earlier on Friday, Vucic met with Serb representatives from the region at the Novi Sad City Hall.

According to announcements, that meeting was attended, among others, by Patriarch Irinej, President Dodik, and PM Brnabic.

Nobody has yet been held legally accountable for the crimes committed during Operation Storm, that is each year celebrated in Croatia, in stark contrast to the mood in Serbia.

However, unlike during several previous anniversaries, tensions are somewhat lower between the two countries this year, with only a new "trade war" currently spoiling their relations - news agencies said earlier on Friday.