Voting was repeated at 15 polling stations on Wednesday due to irregularities that occurred during the April 24 early parliamentary elections in Serbia. 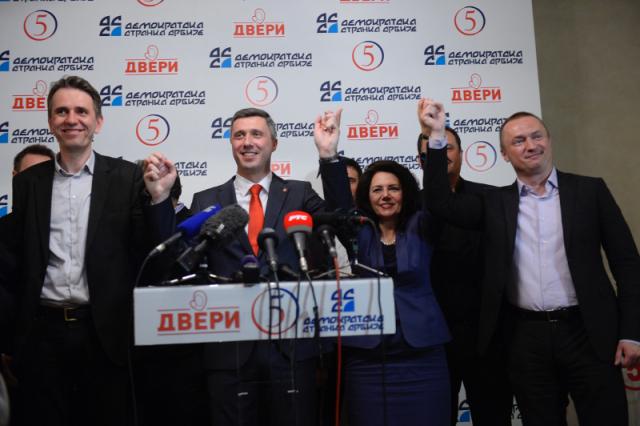 The DSS-Dveri was only one vote short of crossing the 5-percent threshold on April 24 and of winning seats in Serbia's new National Assembly, RIK said last week.

This coalition announced late on Wednesday that they now received more than a thousand votes over the necessary number and will be represented in parliament. Dveri Movement leader Bosko Obradovic told reporters at the DSS HQ that the coalition received a total of 1,998 votes in repeat elections - 25 percent of the ballots cast today.

According to observers from the CRTA NGO, the turnout on Wednesday was 41.9 percent.

DSS leader Sanda Raskovic-Ivic spoke earlier in the evening to say that her list achieved "a huge success" considering the "satanization" that it suffered.

"If (SNS leader Aleksandar) Vucic had this wisdom and this experience on April 24, he wouldn't have been either lying or stealing, because he then succeeded in doing one thing - uniting the opposition around truth, justice, a fight for institutions and media freedoms," she said.

She thanked other opposition leaders who supported her coalition, and suggested that Vucic's party and the SRS, led by Vojislav Seselj, had forged "a new, secret, marriage."

Enough is Enough (DJB) leader Sasa Radulovic, who was at the DSS premises in Belgrade, explained that Wednesday's voting results suggested the Radicals (SRS) and the Progressives (SNS) made a deal, and that Radical supporters voted for the Progressives.

DS party leader Bojan Pajtic was also present, and noted as he addressed reporters that Aleksandar Vucic, rather than the electoral commission, was once again the first to announce preliminary results - "showing that the will of only one man rules in Serbia."

"That man has been defeated, and his strategic goals have been defeated - to increase the number of (SNS) MPs, and destroy the DS. Today he has 27 MPs less, and along the DS that very much so survived, he's got two more opposition lists in parliament," said Pajtic.

Leaders of the SDS-LDP-LSV list Boris Tadic and Cedomir Jovanovic were not at the DSS HQ tonight. Their list could have in theory been left below the threshold.

Speaking about them, Radulovic said:

"They were fighting for the threshold, they went separately, while those of us who gathered here called on the voters to circle the number 5 (DSS-Dveri) in defense of the electoral will."

Speaking earlier in the evening, Aleksandar Vucic said that his party won "more than on April 24" - namely, "nearly 20 percent more in these polling stations where we had just short of 46 percent."

"So much for (electoral) theft," he said, adding that "the people of Serbia showed they cannot be defeated with lies and threats."

As things stood early on Thursday, a total of 12 lists will be represented in the National Assembly - seven that had to cross the five-percent threshold, and five more, representing minorities:


The snap election's final results will be announced after the votes cast today have been counted and verified by the Republic Electoral Commission (RIK).