Serbia and China "will deepen their cooperation in the field of security," Nebojsa Stefanovic and Meng Jianzhu have said. 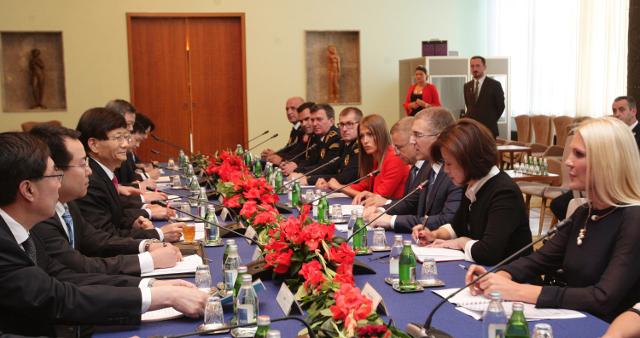 The Serbian interior minister and deputy PM met with Meng, the Chinese president's special envoy and secretary of the Central Political and Legal Affairs Commission of the Communist Party, in Belgrade on Monday.

According to the Serbian government, Stefanovic told reporters at the Palace of Serbia that they discussed "the fight against organized crime and terrorism, as well as the use of new and modern technologies that increase efficiency in this fight."

He said that the Serbian Interior Ministry (MUP) has started cooperation with the Chinese company Huawei, adding that "a better control of traffic and more efficient prevention of crimes will be established through the camera system."

Stefanovic also said that he and the Chinese official "discussed cooperation in the fight against terrorism and extremism."

He expressed gratitude to Meng "for his offer that Chinese instructors come to Serbia, and that our people go to China for training."

"We also thank China for its principled position not to recognize the unilaterally declared independence of Kosovo. This position has been reiterated today," Stefanovic said.

Meng said that they agreed that Serbia and China should take strong measures in combating organized and cross-border crime.