BRUSSELS -- President Vucic emphasized in Brussels that an informal working dinner was of great importance and announced he would protect Serbian people and our interests.

BRUSSELS -- President Vucic emphasized in Brussels that an informal working dinner was of great importance and announced he would protect Serbian people and our interests. 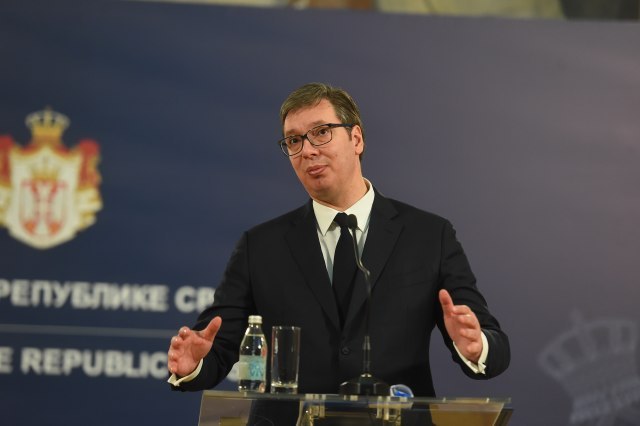 On 16 February, representatives from six Western Balkans countries joined Presidents Michel and von der Leyen, Croatian Prime Minister Plenkovic and High Representative Borrell for a first informal meeting in Brussels to prepare the EU-Western Balkans Summit to be held in Zagreb in May 2020.

At the beginning of the dinner, President Michel stressed that it was an opportunity to reconfirm the European perspective for the Western Balkans partners.

He stressed that it would not be easy for him or for other Balkan participants.

"I want to thank Macron"

Vucic thanked French President Emmanuel Macron for his kind words, but added that he would like the EU's attention to be far greater for the Western Balkan countries.

On the eve of an informal dinner hosted by Western European Council President Charles Michel, Vucic told TV Pink that although he and Macron might have different views on European politics, Macron has made drastic changes and positioned Europe as a geopolitical player.

Vucic responded to a reporter's question why Europe is so interested in WB countries and how he sees praise for him as a great leader who came from Munich from Macron that the EU should invest more in Serbia.

"I want to thank Macron. I appreciate him very much and thank him for his kind words. his words are binding on us," Vucic said, saying he would do his best to position Serbia in an even better way. Vucic thanked the citizens of Serbia for welcoming Macron so sincerely and wholeheartedly during his visit to Belgrade.

Everyone in the region is looking for a culprit in Belgrade, saying they would have a common foreign policy theme and have unanimous votes at rallies such as tonight, Serbian President Aleksandar Vucic said before the informal meeting in Brussels began.

"They all have a problem with Belgrade and Serbia. They got used to this policy from the 1990s, early 2000s ... The easiest way is to blame Belgrade for everything, it goes well," Vucic told Pink when asked what he would say to Zeljko Komsic at a dinner in Brussels, regarding to his statement that Vucic did not condemn Milorad Dodik's statement, thereby, as Komsic concluded, the President of Serbia is involved in breaking Bosnia-Herzegovina apart.

Vucic said he could not lecture Dodik because he is his friend and a member of the BiH Presidency. "I am neither Boris Tadic nor Slobodan Milosevic, I am not one of those who thinks he is the supreme lord of the world. I am the President of Serbia. It is my duty to offer assistance to the Serbian people west of the Drina River, in Montenegro, and not to give someone a lecture", Vucic said.

Vucic recalled that Dodik, at a press conference in Belgrade yesterday, expressed his desire for the RS to find its way and that if Dayton's disrespect continued, he would embark on the path of independence.

"I said that Serbia respects the integrity of Bosnia-Herzegovina and RS as an entity, and that the Dayton Agreement implies that you cannot allocate property as you see fit, even if it was the ruling of the Constitutional Court, but as the Dayton Agreement said", Vucic noted.

"This is our position, which we need to understand, to be able to oppose, and to speak out and raise contradictions to which they have no answers - why Serbs in Republika Srpska do not have the same rights as everyone else, why Serbs in Montenegro have no rights, especially not like Albanians in North Macedonia? But there are no answers to these questions", Vucic said.

He added that it is clear to everyone in Europe that there is no answer to hose questions.

"It is not true that they are not aware of this, they all know it, so what do you want from Serbs?" Vucic asked, adding that the Serbs will not use rifles to exercise their rights, but they want to be respected and esteemed".

He recalled that he said the same in Munich yesterday, but that he was facing a wall of silence.