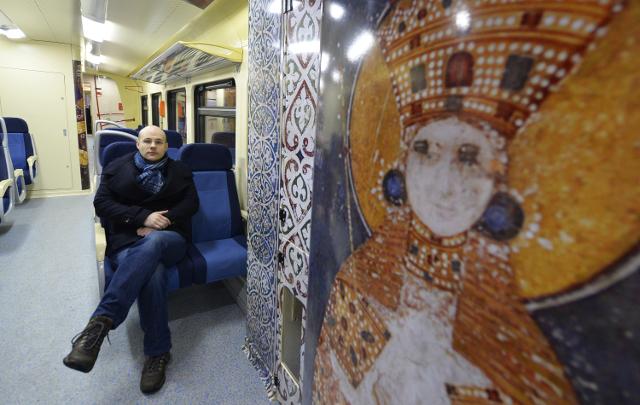 Graphic designer Andrej Vasiljevic, the author of the artwork (Tanjug)

The line starts in Belgrade, and goes to Kosovska Mitrovica in northern Kosovo via Mladenovac, Lapovo, Kraljevo, and Raska.

Marko Djuric said on Friday he "doesn't expect Kosovo's authorities to prevent the train on the Belgrade-Kosovska Mitrovica line from entering the southern (Serbian) province."

The director of the Serbian Government Office for Kosovo and Metohija remarked on Friday that treating the train in that way "would have to do with nationalism, chauvinism, and limiting the basic human rights."

Responding to a reporter's question during a news conference dedicated to the Haradinaj case, he noted that traffic between central Serbia and Kosovo has been taking place "for years" - including the dozens of buses that travel each day between Belgrade and Pristina and Kosovska Mitrovica, and other towns.

"I see no reason for this line to be any different, it's goal is to better connect different parts of our country," Djuric said.

Asked "whose idea it was to paint the interior with religious motifs," Djuric said the public would be informed on Saturday, before the train leaves Belgrade.

Journalists also wanted to know "how the money of the state of Serbia is being spent in Kosovo and Metohija, i.e., whether the Office can guarantee that the funds reach those who need them the most." Djuric said that the situation was "better than during previous governments."

"We've presented the results of our work to the public several times," he said, noting that there are "finished apartments and more assistance than in the past."

"There's certainly much to be done yet, considering that the institutions have been functioning in irregular conditions for 17 years now. The Office is open to all suggestions," Djuric said.