It started: Prime Minister Brnabic first in Serbia to receive the vaccine PHOTO/VIDEO 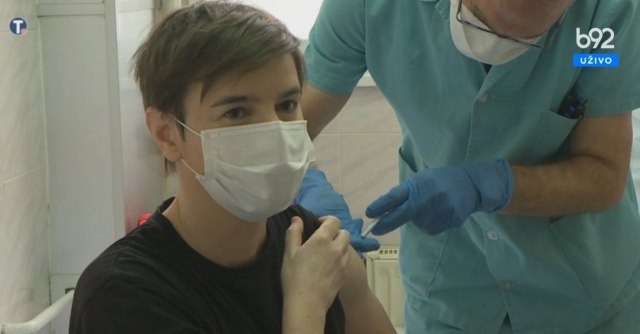 After fulfilling the conditions, taking the anamnesis and filling out the form, measuring the temperature, the Prime Minister received her first dose of the vaccine at the "Torlak" Institute. She thus became the first person in Serbia to receive the coronavirus vaccine.

4.875 doses of vaccines from the company "Pfizer" were delivered to Serbia, and it was announced that citizens would be vaccinated first in the gerontology centers in Belgrade and Novi Sad.

Being hosted on RTS, Kisić Tepavčević said that she was proud that Serbia managed to procure the vaccine among the first in the world, "as we said was our intention".

"The vaccine in our country is great news. It is something that can be a light at the end of the tunnel in an epidemic," she pointed out. Speaking about the beginning of vaccination in gerontological centers, which should start today in Belgrade and Novi Sad and tomorrow in Nis, she said that the decision was not made "ad hoc".

"That decision was not made ad hoc, there is a coordination body that deals exclusively with this issue. In relation to the World Health Organization (WHO) and other relevant health organizations, we have made criteria," she added.

She emphasized that the doctors have been trained and that they are ready to immunize the citizens with a vaccine that, as she stated, has proven to be safe and does not cause severe negative reactions.