Vucic: The next two weeks will determine our destiny VIDEO 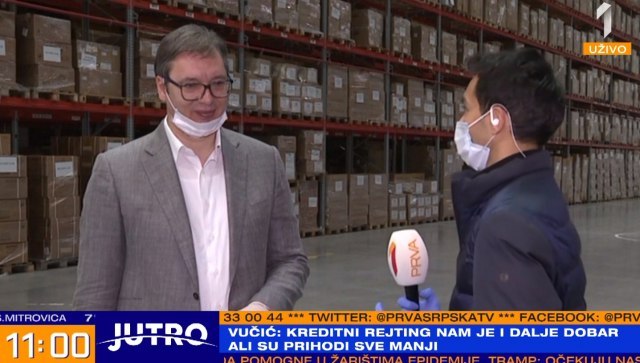 "I would say three weeks, but the next two will determine our destiny. There is no doubt about that," he said.

He pointed out that 573 respirators had been delivered to Serbia since the crisis broke out, and that we have paid for another 1.000.

"You know, when America orders 30.000 respirators, then there is fight for them. Money doesn't matter, just to get one," he said.

He said Serbia was able to get respirators because we were "resourceful and responsive".

Vucic said that ninety percent of the people were responsible and that the remaining ten percent were causing problems.

"We go to the park, to Fruska Gora for a barbecue, it doesn't matter how many people we get infected," he said.

"No one is crazy and eager to torture people, whatever they think of me and others. Afterwards, we will have a fight to preserve jobs and the economy," Vucic said.

He also spoke about his health, which prevented him from attending the presentation of new economic measures last week.

"I'm not a man who is particularly healthy. Those who want to talk about mental health would be happy about that. That's fine, and as for the latter, I have the usual problems that I will have to deal with," he said.

He emphasized that he did not want to "hide in a mouse hole" and wanted to show the people that he is with them even in times of trouble.

"I ask people to get ready for Catholic and Orthodox Easter that there would be no gatherings," he said, recalling that Merkel made a similar decision in Germany.

He also said he did not expect a large number of our nationals returning from abroad for the holiday.

"Few people are currently arriving from abroad. Some are just getting fired at work, some realized that they will not return to work soon, so they want to return home. We expect up to 10.000 more returnees," he said.