Today, the President of Serbia, Aleksandar Vučić, presented decorations - gold medals for merits and for zealous service to members of the Serbian Army. 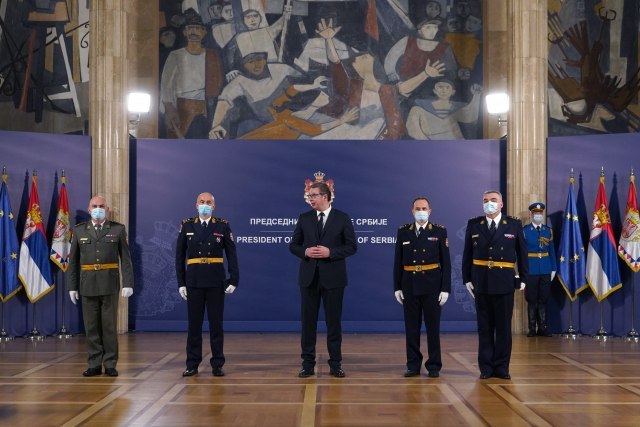 The ceremony of presenting the decorations was attended by the Minister of Defense Nebojsa Stefanovic and the Chief of the General Staff of the Serbian Army Milan Mojsilovic.

"Serbia, strong and modern, will focus its economic strength on further strengthening the security of citizens," the president said. The President pointed out that the previous period was marked by significant investments in the defense system, and that the material status of the army is somewhat better today, but certainly better than ever before.

"Serbia is capable of dealing with all security challenges, and that is why I thank all of you, and I tell you - well done," Vucic said at the ceremony, which was held in compliance with all epidemiological measures.

The President reminded that yesterday was the Land Army Day, and pointed out that every day in 365 days is an important day for soldiers, because they must be on the defense of the homeland, always, at all times, not choosing the time, moment and opportunity.

He pointed out that in the Battle of Kolubara, which celebrates the Army Day, Serbia, in the spirit of its tradition, defended itself and never attacked. He emphasized that General Zivojin Misic, a genius tactician, wrote a glorious history.

"In memory of our ancestors, we celebrate the beginning of this battle as the Day of the Army, a symbol of our victory in the First World War. You who are awarded today are worthy descendants of our famous military leaders, and at the same time, you have the responsibility for future generations of Serbian soldiers, establish a moral vertical with the heroes of Cer, Kolubara, Morava and Kajmakcalan", said Vučić.

As he said, when he talks about the battle of Kolubara, he can't help but recall a historical injustice. Namely, he pointed out that the historical period, which preceded the liberation wars of 1912-1918 was the period of reform of the Serbian army, which was started by kings Milan and Aleksandar Obrenović, but even today the forgotten Dimitrije Cincar Marković, a key person for this important process.

"He is the creator of the authentic Serbian military doctrine, a man whose work essentially contributed to the future triumph in the Balkan wars, but also to the greatest victories in the Great War," Vucic said.

He pointed out that he was the first strategist to organize the Serbian army according to modern European and world standards of organizing the armed forces and the first to reject the French and Prussian military doctrine, making them an amalgam, which surgically precisely adjusted the mentality of our man.

The basis of that doctrine was the strengthening of defensive power, which could be effectively turned into offensive at any time. Today, and when we award medals and decorations on Sretenje, but also on the Army Day, it is important that we are always ready to wait for the right moment for a counterattack and against the COVID-19 pandemic, which I believe will come soon", Vučić said and added, addressing the decorated and all members of the Serbian army:

"And I thank you especially for the role that the army has played since the beginning of the epidemic, and which was crucial for the health of the nation," said Vucic. The President repeated today, with pride, as he says, that Serbia is the economic champion of Europe in terms of parameters, and that such results were achieved with a lot of sacrifices and efforts.