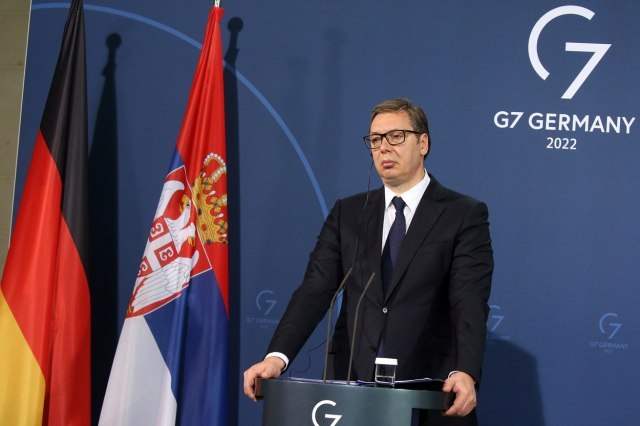 Speaking to the media about the Open Balkans initiative, Vučić said that more people were involved.

"We are satisfied with what we have. Relations between Albania, Serbia and North Macedonia have never been better," Vucic said.

"People think we have to chase someone to justify our existence. We don't have to. We invited them all. We are happy with what we have, we would like to have more, but we are happy. We have good cooperation with everyone," the president said.

"Who wants cooperation is welcome and that's it," said President Vučić.

"You have a big drop in the popularity of the EU not only in Serbia, but also in North Macedonia. You have a seesaw, one should ask how the people would vote today. There must be some faults of certain member states, not only ours. Serbia is on the European path, it is the only policy that Serbia has, but instead of what you have done for us, we do not want to listen to the need to impose sanctions, Serbs and citizens of Serbia remember what happened more than 20 years ago. You can't pretend that everything is the same. You have to try to understand, to hear .We know it's the past, but at least listen to us, hear our suffering. Don't repeat to us every day what you want from us. We have our own people," Vucic said.

He said that he had listened to the humiliating comments of various people about the Croat media head hunt.

"I have listened to the humiliations of various who boast of being right-wing, talking about some bullets, I would like them to show me where and when it happened. It shows how many people in Europe think they are entitled, due to our European path to determine what we can and what we can't say.

"I will not succumb to Croatian politics"

President of Serbia, Aleksandar Vučić, met today with the Prime Minister of Croatia, Andrej Plenković, and assessed that meeting as "very short".

Vučić answered the journalists in Davos when asked how this meeting went after numerous attacks on him and Serbia coming from Croatia. He assessed that Croatian behavior is an example of how many in the EU think that because of the EU road, they can determine for Serbia what we can or cannot say.

"Croats think they have the right to determine what you say and do. The former Serbian leadership crawled in front of them, and as soon as someone is not like that and says he respects their victims, but also seeks justice for the killed Serb children in Croatia, they immediately become the greatest adversary", he said. He emphasized that he would not support politics.

"Just as they will ban Sweden and Finland from joining NATO, they will also ban us from joining the EU," he said, commenting on threats from Croatia that Serbia's European path would be blocked due to the indictment filed by the Serbian war crimes prosecutor's office against four Croatian pilots for bombing a refugee column in the Storm.

He added that if the price of entry is to reconcile with the murderers of children, then Serbia will not accept that. He emphasized that the most serious crimes against Serbs were committed in the territory where most Serbs were killed in one location, "more than in all wars combined".

He assessed that Croatian politics does not speak about reality and insists on presenting itself as a victim, while he says that he is able to speak about the atrocities that Serbs have made to others, which is not the case in Croatia. He also said that the Croatian Academy of Sciences and Arts demands that the Jasenovac myth be banned.

"It is not a myth. It is a tragedy of Serbs, Roma and Jews. To forget the place of suffering so that they could write nicely about me? Just let them continue nicely. I have no problem with that: they their own, we our own," he said.

As an example of a good meeting in Davos, despite the difficult circumstances surrounding sanctions against Russia, Vučić pointed out the meeting with French partners.

"Because they expect some enthusiasm and optimism, and there is none"

Vučić said that he conveyed the message in Davos that Serbia cannot change its policy "as one thinks" and pointed out that Serbia is on its way to the EU and that it is grateful for the support it received from it, but that it is necessary to understand the position of Serbia, and not just to repeat what is expected of it.

"If we want to go to the EU, we need a bilateral approach, to feel respect," Vucic told TV Pink in Davos, where he is attending the World Economic Forum. Answering the question about the amount of diplomatic dialogue conducted at the "Diplomacy and Dialogue on the Western Balkans" session, Vučić said that the language was decent, but that it was from people from the West who attended, and who, as it was stated, there were many, heard that it was quite depressing.

"Because they expect some enthusiasm and optimism, and there is no such thing," Vucic said. He emphasized that there is a big drop in the popularity of the EU, not only in Serbia, but also in North Macedonia.

"Where Macedonians live, you mostly have a seesaw and the question is whether people would vote today. Someone has to imagine why this is so. Let it be the fault of both us and the Macedonians, but it must also be the fault of someone else. There must be guilt in one of the member states, or in Brussels, and elsewhere, it cannot be only our guilt," Vucic said. He added that he emphasized at the session that Serbia is on the European path, although most citizens today are against it.

"But Serbia cannot change its policy as one day someone thinks that politics should be changed. Serbia is on the road to the EU, that is the only path that Serbia has and we are grateful for the money, for your support... It is huge, and we appreciate that, but do not listen to the messages every day, instead of what you have done for us and what we are doing together: "Recognize an independent Kosovo, impose sanctions on Russia... Take it easy, we have our state and our interest", Vucic emphasized.

He assessed that it sounds hypocritical when it is said that territorial integrity is the highest value, which must be protected, while the citizens of Serbia remember what happened 23 years ago.

"At that time, the territorial integrity of one country was not particularly important," Vucic said. He added that that is why the position of Serbia must be understood.

"You can't pretend that everything is the same and that everything has to be the way you want it. You have to understand Serbia, you have to try to understand and hear. We know it's the past, but listen to our frustrations, hear our torments. You listen to us. And don't repeat every day what we know, what you expect and what you think. We have brains, our politics, our head and our country, as well as our people and our citizens," Vucic said.

Serbian President Aleksandar Vucic said today that he had good meetings in Davos with numerous European and world officials, adding that he spoke honestly and openly about the problems, pointed out a different view of the situation in Bosnia-Herzegovina than most present and expressed different views on Albin Kurti.

"We had numerous talks here, with presidents and prime ministers, from Armenia, to the prime minister of Liechtenstein, other countries, everyone from the region who was present, but the same thing is being discussed," Vucic told reporters in Davos.

He also added that he had talked with representatives of the EBRD, the financial sector, Miroslav Lajcak, and others from, as he says, the "European top officials", the OSCE and other organizations.

"The essence is that I was honest, open, talked about the problems, pointed out a different view of the situation in Bosnia-Herzegovina from most of those present, as well as different attitudes towards Kurti," said Vucic, adding that he could not reveal details from the session.

"Diplomatic dialogue on the Western Balkans", because of the rules, but he pointed out that they presented completely different visions of the future of the Balkans. He added that even today, the dominant topic was Ukraine, Russia and Russian influence in the region. He added that he also talked with some heads of foreign services, presidents of states, and that he received an invitation from the President of Armenia to visit Yerevan, to which he responded by inviting his colleague to visit Serbia. He also singled out a conversation with Klaus Schwab, who is also expected in Belgrade soon.

"I talked a lot about how we can position ourselves in the world today, and I also talked with the head of the American Exim Bank, about a big loan in the future, for important energy projects, for solar and later hydro projects. It was a great meeting, short but concrete, quick. We agreed well and I believe that we will soon come up with concrete plans", said Vučić. 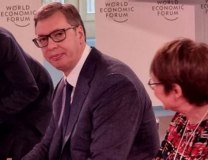