Vučić: Serbia is not a punching bag; "We know who their target is" VIDEO

President of Serbia, Aleksandar Vučić, attended military exercise of the units of the Serbian Army in the "Rastko Nemanjić" barracks in Pancevo. 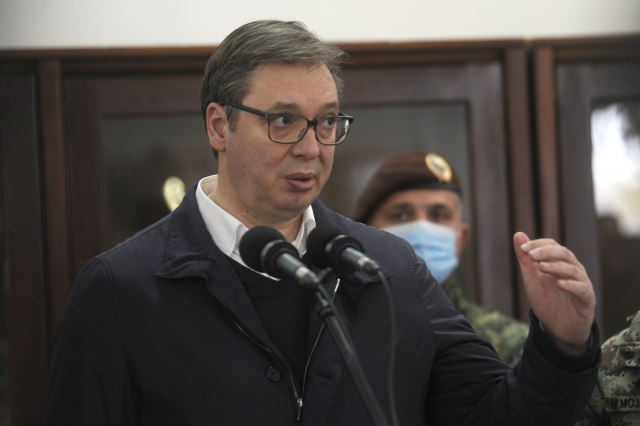 The military exercise, which showed the training of the 72nd Brigade for special operations of the Serbian Army called "Spearhead 2021", began at 11 a.m. in the "Rastko Nemanjic" barracks in Pancevo, in the presence of President Aleksandar Vucic.

Apart from Vučić, the Minister of Defense Nebojsa Stefanović and the Chief of the General Staff of the Serbian Army, General Milan Mojsilović, were present.

After the exercise, Vučić thanked the Armed Forces and announced that Serbia would invest more and more in the army, and that their salaries would be raised gradually.

He told the soldiers that he expects them to be a deterrent for every potential aggressor.

"For us, the role of the army is very important," says the president.

He says that Serbia must deter every aggressor and defend every attempt of the assault on our territory and citizens.

"It should be clear to everyone that Serbia is not a punching bag, so that they could threaten us in the way many have done in the past," he added.

He announced that salaries in the Serbian Army would be significantly increased in May.

"We say 'good job' when we want to praise them, I think they were great," he added.