"Yes, there is a panic over air pollution", Vucic said, sending a message to Trivan

Yes, there is a panic about air pollution in Serbia as all spread it, Vucic said in TV Prva Morning program, sending a message to Minister Trivan 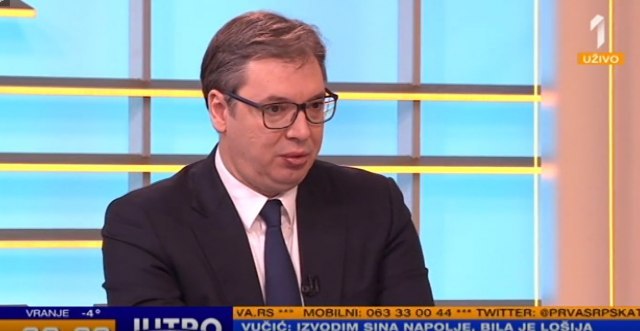 "It is a real problem, but also a part of campaign", Aleksandar Vucic said, adding that it is sometimes grotesque, citing the live coverage of journalists who intentionally cough while reporting on air pollution.

"There is a problem, a real one, that has been neglected for decades. There is also a problem in Milan, because yesterday we had the same number of particles, and Milan is one of the most developed cities", he said, adding that he did not want justification but solutions.

Asked if he was taking his child outside, Vucic said that his three children live in the most polluted part of Serbia and Belgrade, which is New Belgrade. "Yes, I take the baby outside, as my parents took me out, too", Serbian President said.

There is no room for panic, Vucic points out.

Recalling that air has been polluted in Serbia for days without any of the responsible officials announcing themselves about it, starting with the Prime Minister, Minister Trivan, Deputy Mayor of Belgrade, who did not respond to calls for a guest appearance to explain to the citizens what was happening, Vucic points out "that, first of all, he asked Prime Minister Ana Brnabic if the man was alive, to say something should be done because he saw that people began panicking".

Still, he points out that there is no room to panic. "I served in the army in Sarajevo municipality of Lukavica and there was lots of fog back then", Serbian President said.

Asked if he was now feeling the pollution when he breathed in, he said he was not feeling anything: "If I felt something, I would have no problem telling you. Fog has always been here, I've worked in London and it has always been covered with fog. Ours is to address the problem and see what to do," he said.

Asked to comment on the writing of today's press that says that the Minister of the Environment, Goran Trivan, should leave minister's position, Vucic says: "I would like to ask the Minister, and I have nothing against him: do not run away from responsibility. Embrace it, show diligence and even if you make a mistake, people will appreciate it".

When asked if there is a problem regarding Minister Trivan, insinuating that he is coming from SPS, President of Serbia points out that he does not divide ministers by their political affiliation. He also rejected the possibility that some political conflict is hiding in the background of the whole problem of air pollution.

He added that the state will solve this problem in the next six, seven years, with continuous work on solving pollution problems, and that the most important projects are desulfurization and introduction of green energy.

As an example, he stated that a project of desulfurization at TENT has been agreed with Japan's "Jake", while something similar is being done with the Chinese in Kostolac.

He always said he avoided shifting responsibility to someone else, and that local government could not solve this problem alone, but the state had to solve it.

"And they will solve it in the next six to seven years," Vucic emphasized. Vucic added that major problem today stands in a much higher level of road traffic, since about 20 percent of the total pollution comes from road traffic.

He stated that EPS had invested € 475 million over the past five years for various filters, offsets on power plant blocks, but that this is not even close to being sufficient.

"We have to be fair and say what we can and want to do," Vucic said, stating that the biggest problem we have in Belgrade springs from a coal and wood heating, and there is a campaign against mini hydroelectric plants, which is a source of green energy.

"We should be fair to ourselves and say whether we want green energy or not," Vucic said.

We have started to address the problem, but it will not be enough, because we need heavy investments in this field, stating that the Germans have made a plan to invest € 86 billion in railway traffic for the railway to take over transportation.

We will continue along this path and invest € 3.5, up to € 4 billion euros in road traffic relief over the next five years. And this amount is rather scarce, he concluded.