Serbia grateful to Bulgaria for its vote in Energy Community 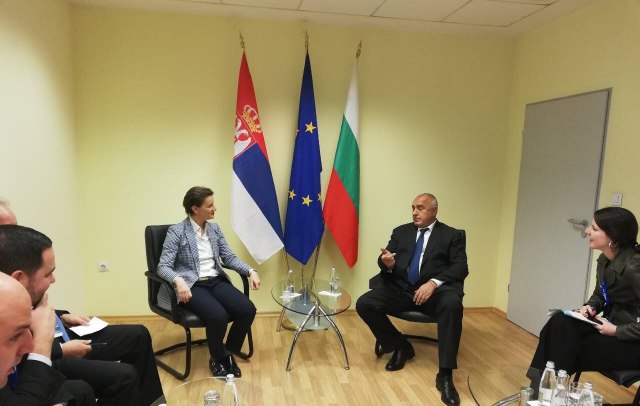 During it, she "expressed her gratitude for support for voting in the European Energy Association," the Serbian government announced on its website, citing a statement the PM made for Tanjug.

Brnabic said she "thanked her Bulgarian counterpart for the support that this country, although it had recognized the unilaterally declared independence of Kosovo, during the voting in the European Energy Association, which is very important for Serbs living in Kosovo and Metohija, so that the Serbian electricity network will remain there and that they will have a safe supply."

The prime minister assessed that this "was a great and friendly gesture," adding that she conveyed gratitude to the prime ministers of Montenegro and Macedonia, with whom she participated in the panel at the start of the summit in Sofia, who abstained during the vote.

Also on Thursday, but in Thessaloniki, Greece, Ana Brnabic announced that Serbia was "deeply committed to regional cooperation."

In her speech at the 3rd Thessaloniki Summit last nigj, Brnabic pointed out that there is no prosperous Serbia without a more connected and prosperous region.

Serbia has two foreign policy objectives, one strategic – EU membership and the other is regional cooperation, Brnabic said.

She recalled quadrilateral meetings with Greece, Romania and Bulgaria, adding that Serbia appreciates it very much not only because of cooperation, but also because of the sharing of experiences with countries in the EU.

The prime minister added that within the framework of regional cooperation, the most important topics will be infrastructure, energy and better connectivity, and announced the quadrilateral meeting of Serbia, Greece, Romania and Bulgaria in December in Belgrade.

Brnabic was welcomed by the moderator in Serbian, saying that Serbia and Greece are "always together."