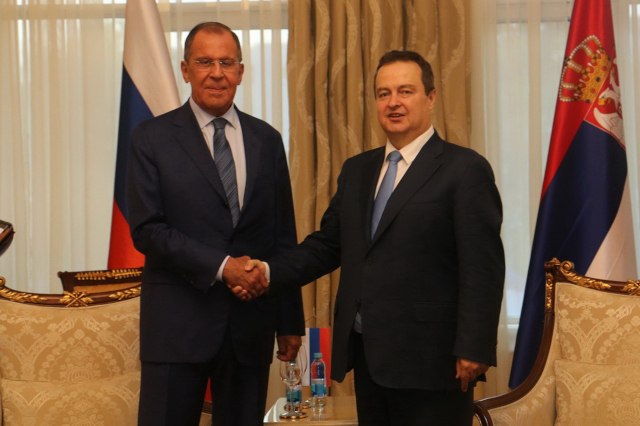 Dacic and Lavrov assessed on this occasion that the level of trust and high dynamics of Russian-Serbian contacts show that relations between the two countries are continuously and productively evolving, the Serbian government has announced.

The two ministers agreed that the relations between Moscow and Belgrade are progressing in each field, assessing that mutual relations have reached a very high level of strategic partnership.

Dacic informed Lavrov about the course of the Belgrade-Pristina dialogue and reiterated Belgrade's position that without the Russian Federation there could not be a long-term and sustainable solution for Kosovo and Metohija.

Lavrov stressed that Russia supports the dialogue between Kosovo and Serbia, with the necessity of respecting UN Security Council Resolution 1244.

He reiterated that Kosovo Albanians have not fulfilled agreements with Serbia achieved with the mediation of the European Union, despite the constructive attitude of Belgrade, stressing that the EU must influence Kosovo.

Lavrov said that Moscow strongly supports the Dayton Peace Agreement, the territorial integrity and sovereignty of Bosnia-Herzegovina, the equality of the three peoples, and the constitutional jurisdiction of the two entities in Bosnia-Herzegovina.

He stressed that Russia has always had constructive cooperation with the EU and the United States on issues in the Balkans, and sees no reason not to continue, and not only one of these parties interfere in resolving issues in the region.

The two ministers concluded that the successful and sustainable ending of the Belgrade-Pristina dialogue would strengthen the stability of the region.

The two ministers also discussed mutual support in international organizations and preparations for the meeting of the intergovernmental commission, which is scheduled for October.

During his stay in Banjaluka, Dacic attended a ceremony to lay the foundation stone for the construction of the Serbian-Russian temple and cultural centre, according to a statement from the Ministry of Foreign Affairs.