"Makes more sense for US to revoke Kosovo recognition"

Foreign Minister Ivica Dacic says it is more logical for the US and the UK to withdraw their recognition of Kosovo - than for Russia to recognize it. 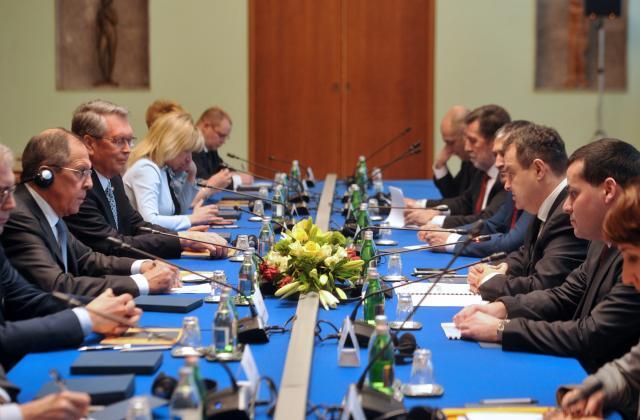 The comment, made after Dacic's meeting in Belgrade with his Russian counterpart Sergei Lavrov, was prompted by Hashim Thaci saying that Belgrade "would be able to step out of the false mythology" if Russia recognized Kosovo.

Dacic told a joint press conference with Lavrov that the Greater Albanian rhetoric is the biggest threat in the region.

"It would be more logical for the United States and Great Britain to withdraw their recognition of Kosovo, and this would have the effect of quieting down Greater Albania hysteria, which is the biggest threat in the region," Dacic said.

Dacic thanked Russia for the continued support provided to Belgrade on contentious issues, including the preservation of the country's territorial sovereignty and integrity and the issue of Kosovo.

Lavrov, who is on a two-day visit to Serbia, also commented on Thaci's remark to say that Russia has expressed its position on Kosovo, and that the statement cannot change it.

"He, like most politicians in Pristina, should be dealing with his own affairs, especially the fact that they are accused of committing war crimes," Lavrov said, and reiterated that unlike some European countries, Russia was committed to UN Security Council Resolution 1244.

The head of Russian diplomacy also said that his country supports the autonomous, independent and multidimensional course of Serbia - because it is guided by the same principles in its own foreign policy.

"An unhealthy situation rules in Europe, due to attempts of some members of the EU and NATO to strengthen confrontation, pushing NATO further to the East without taking into account the opinion of the population - and this regards what happened in Montenegro and what is being attempted now in Macedonia, and even in Bosnia-Herzegovina," Lavrov said.

The minister said that Russia adheres to all agreements concerning Kosovo, but also concerning Bosnia-Herzegovina, and added that his country will oppose any attempt to circumvent these agreements and violate them.