Serbian Foreign MinisterIvica Dacic spoke with US Secretary of State Rex Tilerson on Thursday in Vienna. 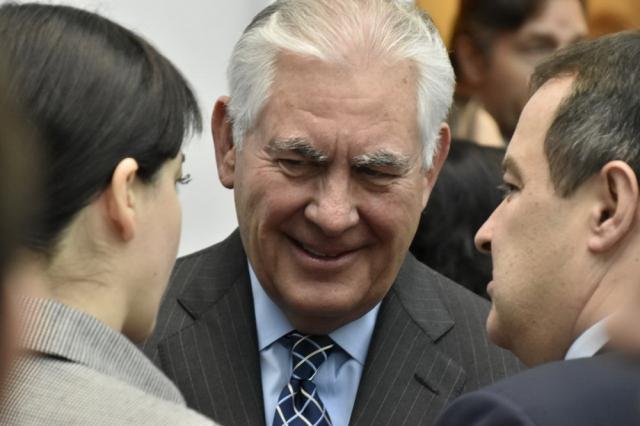 According to a Serbian MFA statement carried by Beta, Dacic told Tillerson that representatives of the old US establishment who defend their policy from the 1990s cannot be the ones to bring changes to the US foreign policy.

"I drew his attention to the fact that changes in US politics should be brought only by the president, the vice-president and the minister of foreign affairs, since representatives of the old establishment cannot do this, because they are defending their policy from the 1990s," Dacic told the US official during their short conversation on the sidelines of the OSCE Ministerial Council.

Dacic also stressed stressed the need to make "certain strategic agreements" and said Serbia was "ready to openly speak with the new US administration," the statement said.

Dacic reiterated that Serbia's position was to find common interest with the United States.

He assessed that it was necessary to have more frequent communication "to see how to find a winning combination where common interests will be found, in order to permanently solve some of the problems that exist in the region, such as Kosovo and Metohija."

"The conversation with Tillerson opened the door to next year have a bilateral meeting with him" Dacic said, according to the statement.

In his address to the OSCE Ministerial Council, Ivica Dacic said that Serbia was truly devoted to continuing its European path, neighborly relations and enhancing regional stability and that it was fully committed to the dialogue with Pristina and the implementation of all agreements that were signed with it, especially on establishing a Community of Serb Municipalities.

Dacic voiced his conviction that "an open and true dialogue is the only road to improving the everyday life of people in Kosovo and Metohija," which was why it was important for "the OSCE to remain a neutral and reliable partner."

Dacic said that Serbia was deeply aware of the security risks and challenges in the OSCE region and that it was fully committed to its chair over the Forum for Security Cooperation in the final quarter of the year.

He said that the crisis inside and around Ukraine, unfortunately, had not been resolved, despite all the efforts to stop it, and called on all sides to fully and unconditionally honor the ceasefire, stop all hostilities and implement the Minsk agreements, including the visible and permanent withdrawal of heavy weaponry.

"Serbia continues to support the operations of the Special Observer Mission in Ukraine, which is the most visible element of the OSCE's reaction to this crisis, as well as other constructive efforts, devoted to finding a peaceful solution to the crisis, while fully honoring the principles of the OSCE," he added.

The struggle against terrorism, the Serbian foreign minister said, remained at the top of the OSCE's list of priorities, while not forgetting the challenges of the migrant and refugee crisis.