PM has "long and difficult" meeting with Media Freedom Group

Prime Minister Ana Brnabic met on Tuesday in Belgrade with representatives of the Group for Freedom of the Media, the government has announced. 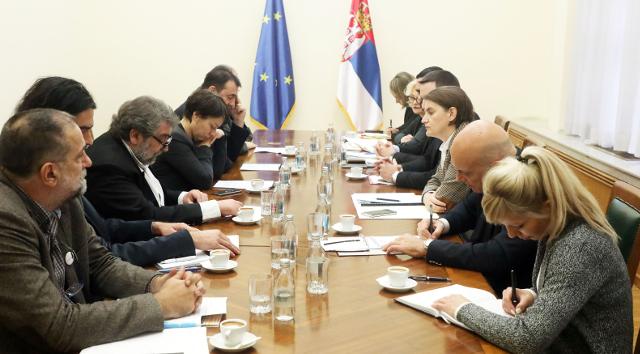 According to this, the group consists of journalists and media associations and civil society organizations.

During the meeting - described as "long and difficult" - they "submitted their demands for improving the media situation in Serbia."

"The meeting, which was long and difficult and, in spite of numerous initial disagreements, took place in a constructive atmosphere, and both sides showed a good will to continue the dialogue," the government said on its website.

Brnabic "pointed out that the primary task of this government is to work on the reforms initiated, as well as to conduct constructive dialogue on all issues of social importance, such as media freedom" and "promised to respond to the requests of the Group within the next ten days, without prejudging what answers would be."

She stated that this was the first working meeting and that the talks with the representatives of the Freedom of the Media Group will resume.

"A special meeting of this group was agreed with Minister of Culture and the Media Vladan Vukosavljevic, who together with Minister of Public Administration and Local Self-Government Branko Ruzic attended the meeting," the government said.