A recess of a special session of the Serbian National Assembly called to elect the country's new government was called overnight after a 12-hour debate. 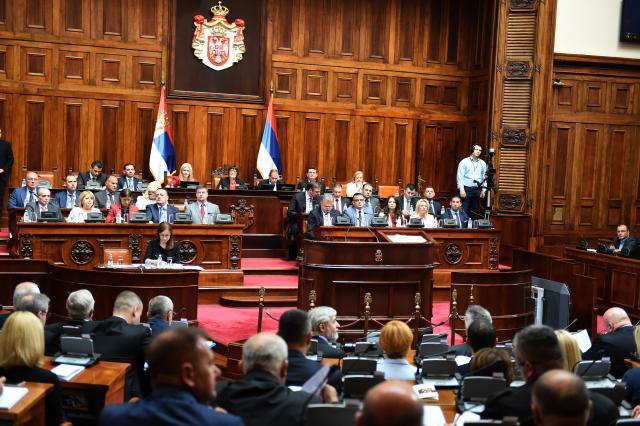 The decision was made on PM-designate Aleksandar Vucic's proposal because of a storm that hit Pozega in western Serbia, "due to which some ministers had to leave the hall."

Vucic on Tuesday presented his proposed cabinet's program and members, while the Assembly on Wednesday started a debate, that continued on Thursday at 10:00 CET.

At the end of the debate, members of the Assembly ("people's deputies") will vote. A new government will be elected if it receives at least 126 votes.

On Wednesday, opposition parties - LSV, LDP, SDS, DSS, Dveri, DJB, DS, and SRS - said they would vote against Vucic's new cabinet, describing the keynote address he delivered on Tuesday as "merely a wish-list with no concrete measures that would contribute to improving the standard of living in Serbia."

The ruling majority - SNS, SPS, JS - said they would vote to elect a government they said would "improve and modernize Serbia."

The Alliance of Vojvodina Hungarians (SVM) said they would vote in favor, and announced they would "sign a coalition agreement in the coming days."

Another party representing ethnic minorities, BDZS, and its leader Muamer Zukorlic, announced they reached an agreement with the SNS, led by Aleksandar Vucic, "to work together to open a new page in Bosniak (Muslim)-Serb relations."

LSV leader Nenad Canak noted that Vucic's address "did not mention the word Vojvodina" - i.e., the name of Serbia's northern province, and described this as "a gaffe." Canak also said Tuesday's presentation contained "a number of interesting things that mostly have to do with the daily-political things, rather than the systemic changes that, it was said, had to come."

Vucic said that leaving out Vojvodina from his address was "possibly a semantic error," adding it was "our job to treat each part of the Republic equally."

Head of the SDS parliamentary group Marko Djurisic said the party would vote against electing the proposed government, as its program lacked any concrete measures aimed at improving the lives of citizens and reducing poverty.

Head of the LDP-SDA Sandzak group Cedomir Jovanovic said he regretted being unable to reach an agreement with Vucic - "not to include me in the government, but about a way in which we will together respond to the key problems in the country."

"We have nothing against these people personally, if they have the expertise - let them head departments, but we will never support gay parades and legalization of homosexual marriages," Markovic said, and received the applause from a part of deputies present.

Vucic denied there were any plans to legalize same sex marriage in Serbia, adding that he chose Brnabic as a member of his cabinet for being "a capable and hardworking woman."

He also noted that Brnabic will not be "LGBT minister, but minister for state administration and local self-government."

Milan Lapcevic (DSS) addressed the Assembly to say his party will vote against the new government because they disagree with its strategic orientation to take Serbia to the EU. According to him, the new cabinet will be the same that was in power for the last two years, "the one that failed to live up to its promises."

The Dveri Movement will also vote against, head of the party's group in the Assembly Bosko Obradovic said, with most of his criticism concerning the demographic policy and the lack of ministries dedicated to "family and Serbs living outside of Serbia," describing the new cabinet as "a reshuffle that didn't require an election."

Pensioner Party (PUPS) group leader Milan Krkobabic said that "long-term stability has no alternative" and that the new government, that they will support, "must make strong moves and continue on the reform course."

Vucic reacted to defend Nikolic, saying he was doing his job well, and accusing Seselj of attacking Nikolic because the SRS leader wants to run for president next year.

But Seselj said he was "ready to withdraw his candidature if legal measures are taken toward Tomislav Nikolic, that the state is under obligation to take."

DS leader Bojan Pajtic said that the policy and the composition of Serbia's new government were of poor quality, and suggested that Vucic nominated Mladen Sarcevic as education minister "only because Vucic's son went to a school where Sarcevic was the headmaster." The PM-designate, who previously accused Pajtic of giving his wife "a directorial position," denied this, and called Pajtic "a dangerous man because he has no shame and no morals."

SPS leader Ivica Dacic also spoke in the Assembly on Wednesday, saying his Socialists will vote in favor of Serbia's new government "because of the results that the SPS-SNS coalition has acheived in the past four years."

Enough is Enough (DJB) leader Sasa Radulovic said that the prime minister's job was to make sure that the system is functioning, "instead of saving a child in Feketic."

Vucic replied to note it was good that Radulovic's party had seats in the Assembly, "because otherwise they would be gaining the trust of citizens with their meaningless criticizing."

DJB deputies, who will vote against, then walked out of the session.

In his address, SNS deputy Aleksandar Martinovic said that Vucic's address on Tuesday was "a scientific work of its own kind," and announced the party would vote in favor of the proposed cabinet.