DAVOS -- Serbian President Aleksandar Vucic says he is "fed up" with Europeans lectures about relations with Russia, China

DAVOS -- Serbian President Aleksandar Vucic says he is "fed up" with Europeans lectures about relations with Russia, China 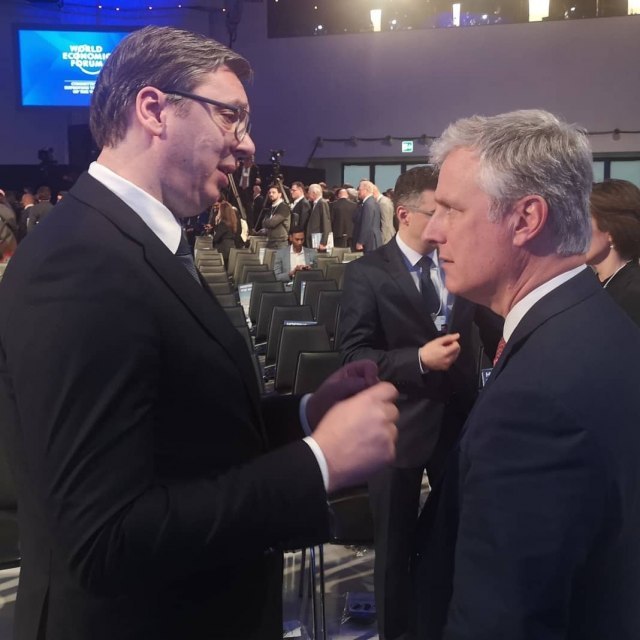 He added that Serbia remains committed to the EU integration despite the delay in the accession process, which he said was "unprecedented."

"To tell you the truth, I am really fed up with hearing lectures the EU leaders gave me about Belgrade's close relations with Moscow and Beijing, and then I see all others meeting with Xi Jinping and Putin more often than I. Do your job; you're sovereign states. Serbia is a sovereign state. We do what is the best for our people and our country", Vucic told Euronews.

Asked who would he choose between the EU and Russia if he had to, Serbia's President said that the Western media did not understand that Belgrade – Moscow relation was beneficial to the Serb people and Serbia.

"I always tell Putin, and I don't hide it like many other politicians from the EU who forget where they come from when they see him… I tell Putin that we are on the European path and that it is our strategic goal. However, that doesn't mean that if we join the EU, we will cut off our links with either Russia or China", Vucic said.

He added he would not bring wrong decisions to satisfy either Brussels or Moscow and that he did not know whether Serbia would be a part of the EU in three, five or seven years, but that he would preserve relations that were good for his people.

Serbia remains committed to EU integration although we are quite disappointed with this project.

"Serbia is not particularly enthusiastic, but we are still committed to the EU membership because we see no alternative. We've been on that road for 20 years already. I think that besides Turkey no other country has been waiting that long," Vucic told Euronews.

He said that the unsolved issue with Kosovo wasn't the only obstacle to Serbia's further integration, adding that the lack of the EU and Western partners' incentives additionally contributed to the delay of the whole process.

"This is mainly because of the relationship between Belgrade and Pristina. However, at the same time, even today, I am not only discussing this with European officials, but also with US Secretary of State Mike Pompeo. I asked him if we reached an agreement with Pristina, if we found a compromise, would it be enough for us to join the EU. And no one from the EU, or even from the US, as they are working closely, could confirm that we would become part of the EU", Vucic said.

Vucic also said Serbia would have to wait for the EU decision on whether it wanted Serbia in the bloc.

Vucic said he was "not happy" about the state of relations with the EU, but that he was still deeply grateful to Brussels for EU assistance provided to Serbia during the 2014 floods.

He added that the Serbian economy is the strongest in the Western Balkans, with 4.5 percent of GDP in 2019 and 4.1 percent this year, which, he says, shows that Serbia is moving in the right direction.