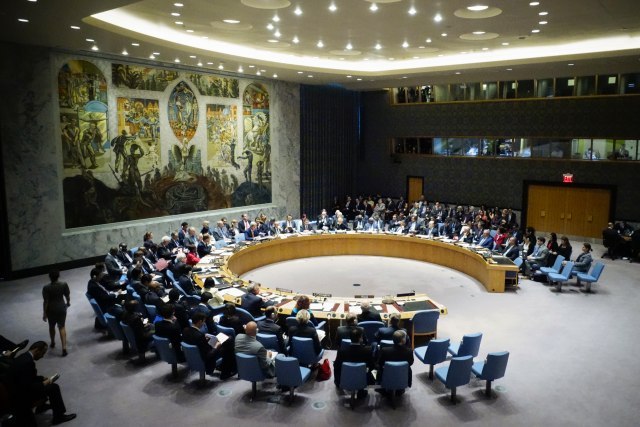 Different views, however, have been expressed when it comes to the future dynamics of holding these sessions dedicated to the situation in Kosovo and Metohija.

Russian Ambassador to the UN Vasily Nebenzya said that Russia shares Serbia's concerns because of the seriousness of the situation in Kosovo.

He told Kosovo Ambassador (to Washington) Vlora Citaku, who referred to this meeting as "a charade" that if this was her opinion, although invited, she had been under no obligation to attend.

He added that Russia does not accept Kosovo being taken off the agenda of the UN Security Council and that it should be under constant control of this body because the situation is unstable and could spiral out of control at any moment.

Nebenzya reiterated Russia's view that Pristina had violated the CEFTA agreement by imposing taxes on Serbian goods and said that Kosovo has since ignored the "unconvincing" demands coming from its western patrons (to revoke the decision).

According to him, the formation of an army in Kosovo represents a violation of UN Security Council Resolution 1244 and there is no guarantee that this army would not move against the Serbs.

He also estimated that statements by Kosovo Prime Minister Ramush Haradinaj about stopping communication with UNMIK would constitute a flagrant violation of the UN resolution and reiterated that Russia's position is that Kosovo can be represented only via UNMIK.

China also noted that it respects Serbia's sovereignty and Resolution 1244 and UNMIK, and stressed the need to find a solution for the dialogue within this resolution.

The representative of China said that the UN Security Council should continue to hold debates on Kosovo.

US Deputy Ambassador to the UN Jonathan Cohen said that UNMIK had fulfilled its mandate and that it was long time to reduce the mission of that body.

He recalled that the United States also in the past demanded a reduction of the UNMIK mission, and called for "urgent progress" in the dialogue with an "immediate" cancellation of tariffs.

The British representative welcomed UNMIK's work but said that Kosovo was "no longer an acute crisis" and that there were other more important world peace problems, and also interpreted the UNSC Resolution 1244 as not prohibiting the formation of an army in Kosovo.

The French representative said that normalization of relations between Belgrade and Pristina depends on the dialogue, and repeated the demand for Pristina to "revoke, or at least suspend" its trade barriers.

According to her, France wishes to improve trade between the two sides and see the political will and compromise "both from Belgrade and from Pristina."