Who is the new Austrian Chancellor? Target of numerous criticisms; in favor of Serbia

The new leader of the People's Party of Austria ( ÖVP), Karl Nehammer, is considered a hardliner, who could return the party to the old, more conservative path. 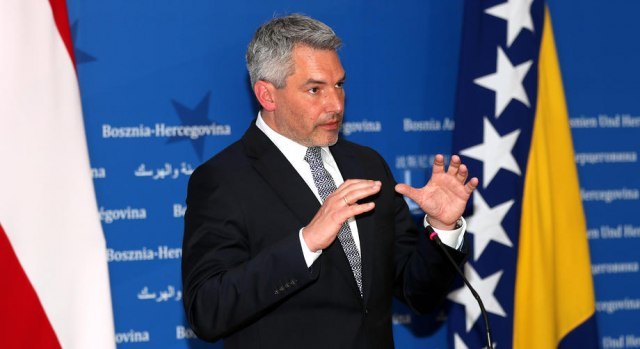 ÖVP's former leader Sebastian Kurz, who decided to withdraw from politics, completely reformed the party, changed its "political color" from black to turquoise, and significantly rejuvenated the leading cadres.

Nehammer, who was the general secretary of the ÖVP at the beginning of the party's reform, could return ÖVP to its original conservative policy, less liberal than under Kurz.

With the departure of Kurz, the gray eminences in the party, governors in several Austrian provinces, re-strengthened their influence in the party, which was partly lost due to the previous leader's strict insistence that only he makes decisions both personally and regarding the party's course. Nehammer is considered a hardliner, which he proved as the Minister of the Interior, when he pursued a strict policy towards migrants.

He was especially criticized for his strict stance when discussing the reception of refugees from Afghanistan.

Nehammer not only refused to accept refugees from Afghanistan, but also wanted to return asylum seekers to that country after the Taliban took power. He also advocated closer cooperation with the countries of the Western Balkans in the fight against illegal migration, making manpower and equipment available to them.

He nurtured good cooperation with Serbia as Minister of the Interior, visited Belgrade this year, and in Vienna, a few months ago, received Serbian Foreign Minister Nikola Selaković and his counterpart Aleksandar Vulin.

Even during the pandemic, Nehammer was firm in his position that all those who violate measures and lockdown should be punished. Nehammer was born in Vienna, and after schooling, he voluntarily joined the army, where he finished his service as a lieutenant. He then worked as a training officer at the Ministry of Defense, as well as a communication coach at the ÖVP Political Academy.

He was targeted by the public after the terrorist attack in Vienna on November 2, 2020. He is accused that members of the Ministry of Internal Affairs did not prevent the assassination. However, Nehammer blamed his predecessor, Herbert Kickl, the current leader of the Freedom Party (FPO), and scandals in the counter-terrorism intelligence service.

That is why he carried out the reform of the intelligence service, which he completed a few days ago with the aim of increasing efficiency. Nehammer will have a difficult task, after all the turbulence and scandals, to regain confidence in the ÖVP. In the last elections, the party won more than 37 percent of the votes, and currently, in the polls, it fell to the second position, with only 24 percent of support.

Nehammer became active in the party organization OVP after he left the army, initially working with the party academy. He was then the head of the service and mobilization department at the party's headquarters from 2007 to 2008, and the training and networking department from 2008 to 2009. He then became the director of the Lower Austrian Association of the Party Academy and was considered close to the then Deputy Governor Wolfgang Sobotka.

In October 2015, Nehammer was appointed Deputy Secretary General and Federal Organizational President of the Austrian Workers' Union (OAAB), the OVP trade union association. During the presidential elections in Austria in 2016, he was appointed deputy manager for Andreas Kohl from the OVP during the campaign, but he failed to save him from a historically poor result of 11%.

He succeeded August Voginger as the Secretary General of the OAAB in 2016, and he held that position until January 2018. In November 2016, he was also elected the Regional President of the OAAB Vienna. From April 2017, he was the district party president of the OVP in Vienna-Hietzing. [2]

In the 2017 federal elections, Nehammer was elected the representative of Vienna. During the later formation of the government, he was a member of the OVP negotiating team in the field of defense. He was elected deputy chairman of the OVP parliamentary faction on November 8 and was appointed media spokesman.

Then, on January 25, 2018, he succeeded Elisabeth Köstinger and Stefan Steiner as Secretary General of the OVP. In September 2018, he also succeeded Efgani Dönmez as spokesperson for integration and migration.

In the 2019 federal elections, Nehammer ran for fifth place on Vienna's state OVP list [8] and eleventh on the federal OVP list. [9] He was also one of five OVP assessors in the electorate during the election. [10] During the later formation of the government, he negotiated in the areas of Europe, migration, integration and security.