China’s major art house film festival has for the past week been featuring a “Yugoslav New Cinema – The Serbian New Wave” retrospective. 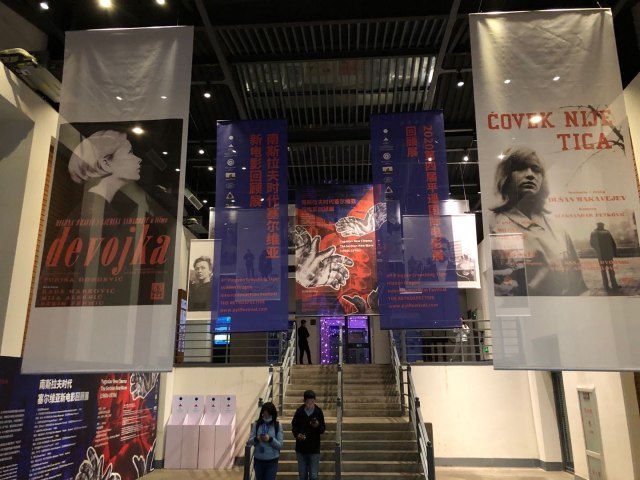 Exclusively for B92.net, journalist Mathew Scott takes a look at how this unique programme came about.

Mark it down as a sign of the times. When the 4th Pingyao International Film Festival (PYIFF) was launched on October 10, the two men who put its “Yugoslav New Cinema – The Serbian New Wave” programme together were, respectively, around 1,335 kilometres and 7,320 kilometres away from the ancient northern Chinese city that hosts the event.

PYIFF creative director Marco Müller and Miroljub Vučković have pieced together the nine-film programme that has been screening over the past week and has, for the first time, introduced a unique and influential period in Serbian cinema to a Chinese audience while re-introducing these films to the world, some five decades after they were made.

But COVID-19 travel and quarantine restrictions have meant Vučković is back home in Belgrade for the duration of the October 10 to 19 festival, while Müller was, first, tucked away in quarantine in the southern Chinese city of Hangzhou before being scheduled to make the dash north to Pingyao on Friday as the festival starts to draw to a close.

“It is a different way of doing things but we have adapted,” said Müller. “What we have looked for with this programme are films that would grip a young audience.”

“Yugoslav New Cinema – The Serbian New Wave” – backed by The Film Centre Serbia and the Yugoslav Film Archive - marks a quite remarkable period of 12 years of filmmaking (1961-1973), and showcases a movement that in the beginning didn’t really appear to know it actually was one, according to Vučković.

“There was no manifesto, no statement. It just happened – like spring,” he said from Belgrade.

It took two years for the programme to be put together, after a plan was hatched between Müller and Vučković to shed light on a period in Serbian cinema little known even among contemporary film fans in the country. But in helping found PYIFF – alongside Chinese auteur and Venice Film Festival Golden Lion winner Jia Zhangke (Still Life) – Müller had wanted to use the festival as a platform to “draw a map of new wave movements globally” for a contemporary Chinese audience.

PYIFF – held inside an old diesel engine plant inside a fort that dates back to 1370 – was first staged in 2017 and has increasingly drawn an audience of young filmmakers and film lovers from the capital Beijing, as it primarily showcases directors’ first or second films made in China and beyond.

What’s a little known fact – outside hardcore cineastic circles – is that the links between Yuoslav/Serbian and Chinese film run deep, dating back to the screening of Walter Defends Sarajevo (1972) – the Hajrudin Krvavac -directed partisan epic that features Velimir "Bata" Živojinović in the lead. The film became so popular after its release that a beer brand – labelled “Valter” after the titular hero – was launched and when Živojinović passed away, aged 82 in 2016, he was lauded in state-run media.

Growing up, Müller had, like so many Italians, been a regular visitor to the Adriatic coast and he had forged friendship with the likes of Dušan Makavejev, on entering the film industry, and on his way to becoming the influential head of the Venice and Rome film festivals. So the connection had been set, and it continued through his friendship with Vučković, critic, festival consultant and The Film Centre Serbia veteran.

“These films made a great impact on me because they were a direct take on the spirit of the times,” Müller said of the PYIFF programme. “In that sense they could really be compared to the early films of the Sixth Generation [in China]. There were aesthetical innovations but also in terms of subject matter they were a completely different take on ethical and political commitments.

Hot off the presses: Award winners from the 4th edition of PYIFF (we miss Pingyao!) the Roberto Rossellini Award for Best Film goes to Philipp Yuryev's THE WHALER BOY & Best Director goes to Ivan Ikic for Oasis - both were selected for and won at @giornate pic.twitter.com/EXkwpRS1CE

“Most of the films had been produced by the socialist Yugoslavian studios. They could be seen as critical but they also worked within the socialist system.”

“Yugoslav New Cinema – The Serbian New Wave” has featured the likes of Đorđe Kadijević’s Praznik (The Feast) from 1967 but Vučković believes the opening scene of Aleksandar Petrović’s Dvoje (A Couple) from 1961 reflects instantly what this “wave” was all about. It features a young woman watching from a window as a passenger runs to catch the city bus, only for the bus to take off down the road.

“It was a kind of blasphemy at this time to show a person not catching a bus, with the driver leaving,” explained Vučković. “But it was not against the system. It was symbolic but not vulgar. Tiny but significant.”

Müller was speaking from quarantine in a hotel room, where he’d been isolated from the world apart from three daily food drops at his door. But a live link had been set up with PYIFF so he could keep track of goings on.

Reports had come in that Chinese audiences had found a commonality between the films in the retrospective and those that had emerged from Chinese filmmakers who emerged post-1990, the “Sixth Generation” mentioned by Müller.

“Several friends have been to the screenings and told me they could really feel the temperature rising,” he said. “They recognise things that were possible in the beginning of the Sixth Generation, the voicing of critical opinions but within the framework of a socialist country.”

For Vučković the hope now was that these films – restored thanks to Delta Video – would be soon introduced to a new generation of Serbian filmmakers, and film lovers.

“If you are positive, you are rewarded,” he said.