Thaci is accused of 98 murders, the trial begins on Monday

Former KLA officers Hashim Thaci, Kadri Veseli, Rexhep Selimi and Jakup Krasniqi have been indicted in a court in The Hague for at least 98 murders. 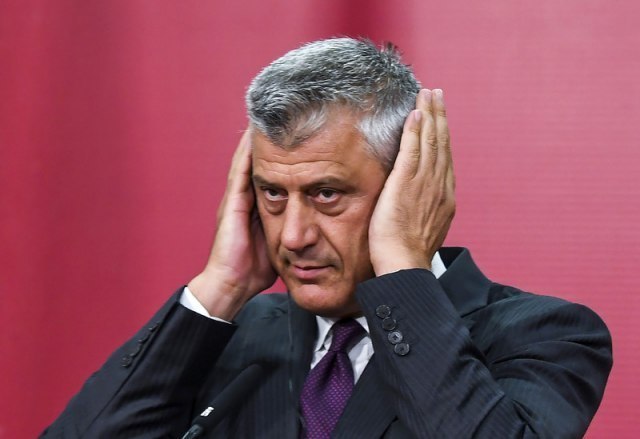 They are charged with crimes committed in 34 illegal KLA detentions in Kosovo and Albania against at least 407 detainees, of whom at least 98 were killed, from March 1998 to September 1999.

Thaci will appear before the judges in The Hague on Monday, November 9, at 3 p.m.

"The first appearance of Hashim Thaci in front of the court will take place on November 9 at 3 pm in the courtroom of the Specialized Chambers of Kosovo in The Hague," the statement said.

The indictment charges Thaci and the others with political and ethnic persecution, imprisonment, illegal arrest and detention, other inhumane acts, cruel treatment, torture (two counts) and murder (two counts).

These crimes are qualified, in five counts, as crimes against humanity and war crimes.

According to the indictment, Thaci and the others bear both individual and command responsibility for these crimes. All were members of the KLA General Staff during the indictment - Thaci as political commissar, later commander, Veseli as intelligence chief, Selimi as chief operative, and Krasniqi as deputy commander and spokesman.

The goal of the criminal association, according to the indictment, was "to achieve and implement full control over the whole of Kosovo by means that included illegal intimidation, abuse, violence and removal of those they considered opponents".

Achieving that goal meant committing crimes, and Thaci and other members of the criminal association shared the intention for the crimes to be committed.

The victims were "people suspected of not supporting the KLA and later the interim government of Kosovo - Serbs, Roma and Ashkali, Catholic civilians believed to be cooperating with Serbian authorities or communicating with Serbs, Albanians who supported the Democratic League of Kosovo or were affiliated with that party, as well as with other parties deemed to be against the KLA".

"Members of the joint criminal enterprise carried out comprehensive or systematic attacks on the civilian population, which they considered hostile, in Kosovo and the areas of northern Albania, from March 1998 to September 1999 at the latest," the indictment reads.

The accused and their accomplices "actively identified and targeted, abducted, interrogated and abused opponents. No later than April 1998... members of the KLA held locations where hundreds of opponents were detained, abused and / or killed," the indictment reads.

Thaci, Veseli, Selimi and Krasniqi not only "issued orders" for the treatment of KLA opponents, but also "personally participated in the treatment (towards them) on the ground" or in "intimidation, interrogation, harassment and detention".

From their high positions, the accused prepared and implemented plans to achieve the goal of the criminal association and participated in "enabling, accepting, encouraging and aiding the crime," the indictment reads.

Although they knew about the crimes, they failed to investigate and punish the perpetrators.

In several municipalities in Kosovo, as well as in the regions of Kukes and Hasa in Albania, the accused, along with other members of the criminal association, conducted a "campaign of persecution" of all those they considered opponents on "political or ethnic grounds."

According to the indictment, members of the KLA illegally arrested and detained opponents under inhumane conditions, beat and tortured them, physically and mentally abused and killed them.

The indictment says that the detainees, mainly Albanians, were constantly beaten, insulted and abused in various ways. Some were "cut with knives" and wounded, and some were subjected to "simulation of strangulation".

One detainee had "teeth extracted with pliers", and the other "was forced to drink thinner when he asked for water".

Two detainees were forced to have sexual intercourse in front of the others.

All the names of the detainees and victims in the published indictment were redacted to protect their identities. In the list of murder scenes in the indictment, the most victims - 24, were found at the location Volujak near Klina, where it is believed that members of the KLA shot the abducted Serbs in 1998.

A redacted version of the indictment was published after Thaci, Veseli and Selimi, who were placed in court custody in Scheveningen last night. Although they claimed to have surrendered voluntarily, the court said they had been "arrested".

Krasniqi was arrested the day before yesterday in Pristina and transferred to The Hague. He will be brought before a judge for the first time on Monday, November 9.

Thaci, Veseli and Selimi will also soon appear before a judge. Defendants have 30 days from their first appearance in court to plead guilty.

Prosecutor Jack Smith filed the indictment against Thaci, Veseli, Selimi and Krasniqi at the end of April, and it came into force on October 26, when it was confirmed by a judge.