Prince Albert II of Monaco is on an official visit to Serbia today, being hosted by the President of Serbia, Aleksandar Vučić 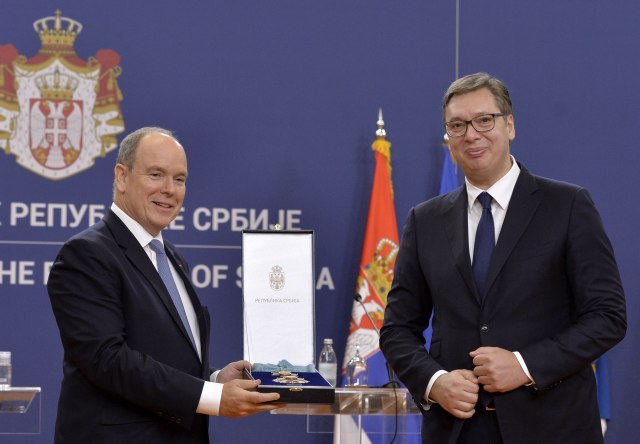 The President of Serbia, Aleksandar Vučić, announced today, after talks with Prince Albert II of Monaco, that Serbia will soon join the Alliance for Multilateralism at the UN, an initiative launched by Germany and France.

"I told him that Serbia is working diligently to achieve its foreign policy goals, primarily to preserve peace and stability. Prince Albert said that the Principality of Monaco has become a member of the Alliance for Multilateralism at the UN, an initiative launched by the Germans and the French.

"We have not joined that Alliance yet, but Prince Albert's advice was to join it", Vucic told reporters.

"I believe that because of everything we could learn today from Prince Albert, but also because of Serbia's commitment to the development of multilateralism, we will soon join that initiative," President of Serbia said.

He says that he talked to him about the European integration of Serbia and asked for additional support from the Principality of Monaco and a respectable noble family.

Today, the President of Serbia, Aleksandar Vučić, presented the Medal with a ribbon of the Republic of Serbia to Prince Albert II of Monaco.

Vučić awarded a high state recognition to the ruler of Monaco in the Palace of Serbia, after the meetings.

This is the first official visit of Prince Albert II of Monaco to Serbia. Serbia and Monaco established diplomatic relations in 2007.

Prince Albert II of Monaco expressed gratitude for the high state decoration of the Republic of Serbia.

"I am very happy to have accepted your invitation to visit Serbia in my very first official visit. It is taking place at a specific moment for the whole world," he said in Belgrade.

He said that a new stage in diplomatic relations has been established, especially with the signing of the economic agreement.

"I came to exchange opinions on the protection of the environment, on the preservation of the sea and the ocean, which I care a lot about. We will also discuss other areas of cooperation, such as culture," he said.