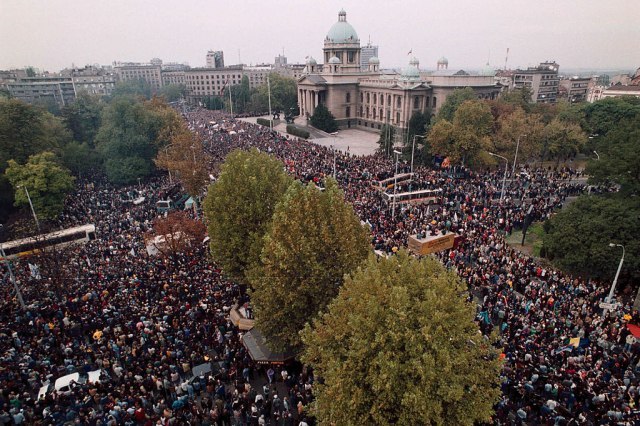 This date is generally seen by the public in Serbia as a day of democratic change. However, there are many who see it as a great missed opportunity for a true transformation of Serbia.

The protests began after Milosevic refused to acknowledge the results of the September 24th presidential election.

He lost in those elections to Vojislav Kostunica, the joint DOS candidate. Kostunica won 50.24 percent of the vote, while Milosevic had 37.15 percent.

It all started on Friday, September 29, with a miners' strike in the Kolubara mines, where electricity is produced for a large part of Serbia.

People from all over the country joined.

Domestic and foreign news agencies estimated that more than a million people expressed civil disobedience to Slobodan Milosevic's regime in those days. What surprised many were the strikes and civil disobedience of workers in large state-owned factories.

One of the fiercest blows to the then ruling set was dealt by the workers of the Kolubara Mining Basin, who persisted in the strike despite daily threats from the regime. The strikes were also organized by the City Traffic Company in Belgrade, as well as employees of the Hydro-meteorological Institute of Serbia.

The culmination followed on October 5 in front of the Federal Assembly, which was attended by citizens from almost all of Serbia. The long lines of cars, buses and trucks moving towards the Serbian capital were tens of kilometers long. Despite the blockade of many roads, a large number of people managed to break through to the center of Belgrade.

At around 3 pm, the protesters stormed the parliament building, after which the assembly was demolished and set on fire.

The nearby RTS building in Takovska Street was also damaged, while the director of the television, Dragoljub Milanović, was beaten in the nearby Tasmajdan Park.

One of the most prominent people at the protest was the recently deceased Ljubisav Djokić, better known as Joe Bagerista, who used his excavator to lead the strike of the demonstrators on the RTS building.

Police at one point ceased to resist and joined the demonstrators. In the evening of October 5, 2000, Kostunica addressed the citizens from the terrace of the Belgrade Assembly.

Hundreds of thousands of people were on duty throughout the night in the center of the Serbian capital, celebrating the victory, but also fearing the possible intervention of the army and other security services of the former regime.

On the next day, October 6, Milosevic conceded electoral defeat and congratulated Kostunica.

"I want to thank those who trusted me and voted for me, but also all those who did not vote for me because they removed from my soul a great burden of responsibility that I have been carrying for ten years. I intend to rest a little, to spend more time with my family, especially with my grandson Marko, and then, after that, to continue to strengthen my party", Milosevic said at the time in front of the cameras in his address to the nation.

Jasmina Jovanović from Miloševac near Velika Plana, who fell under the wheels of a truck, was killed in the demonstrations. Momcilo Stakić from Krupanj died of a heart attack. 65 people were injured.

A memorial with the figure of Jasmina Jovanović was unveiled on October 5, 2002, in a park between Kneza Miloša, Sarajevska Street and Mostar loop, not far from the place where she died.

On October 7, 2000, Vojislav Kostunica was sworn in before members of the Federal Assembly and became the first democratic president of the FRY.

Milosevic was arrested in April 2001 and extradited to The Hague tribunal two months later, where he was tried for genocide in Bosnia and Herzegovina, war crimes and crimes against humanity in Croatia and Kosovo.

Politician Balša Božović believes that the greatest value on October 5 can be reduced to the three most important points.

"It was a matter of the regime's victory in the elections. Democratic victory. Then the defense of votes in the street and what Zoran Djindjic created as the most important part for the start of the creation of modern Serbia - the civil revolution as a non-violent social change," Bozovic said. This is the turning of Serbia towards the West.

As he told B92.net, on that day, the citizens defended their votes by defeating Slobodan Milosevic. He adds that the power was not gained by invading the National Assembly and violence, how according to certain allegations, some are trying to present today.

"With that, they want to erase every memory of that day. October 5 is the day when the conditions were created for Serbia to open up to the world and the European Union, for wars, sanctions and poverty to end, for us to finally start living like a normal world. Serbia has decided that its place is in the west. That is why this day is important because it represented the struggle for democracy, for modern Serbia, for an orderly society, against everything we knew until then," he said.

Bozovic believes that the showdown with the Democratic Party is an attempt to erase all memories of October 5, 2000, as well as everything that followed.

"The Democratic Party, DOS and Zoran Djindjic have got great enemies who are trying to distort history and every positive thought on that day, which is the foundation of modern Serbia. Hence the narrative that he is a great disappointment. Certainly, there were mistakes and omissions, the biggest of them Zoran Djindjic eventually paid with his life, and there were certainly those who lived from that glory until recently and sold on October 5 to enjoy the privileges of the authorities at various times, but that day should still be remembered for the victory of the citizens over the autocratic regime, and after the establishment of the foundations of a modern, democratic and civil Serbia", concludes Božović.

Bojan Kostreš from the League of Social Democrats of Vojvodina takes the most important message on October 5 that no one will tolerate vote theft and an attempt to change the will of the citizens of Serbia, as well as that you can only fight for your beliefs by going to the polls.

"Unfortunately, the lack of lustration, the unwillingness of most DOS leaders to confront our society with the role of the Milosevic regime in the events and crimes of the 1990s, and their inability to carry out fundamental reforms have left us without a chance to change our society radically," Kostreš said for our portal.

Despite that, he believes that the fight was worth leading.

"It was worth fighting and I am proud to have been a part of that movement and a participant in the event," Kostreš concludes.