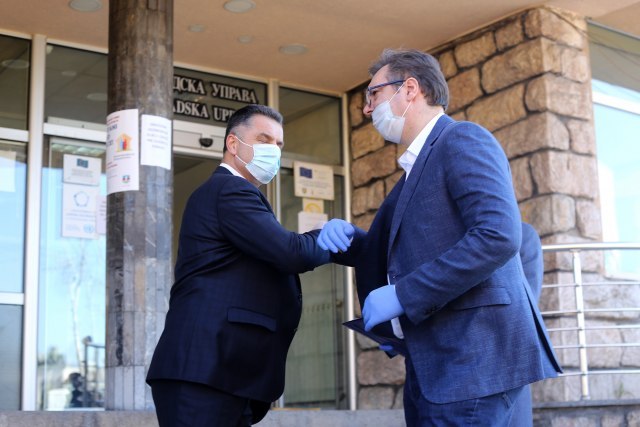 As announced from the Presidency, respirators were delivered at 11 am in the Municipal Assembly building.

Yesterday, Vucic announced that he would visit the hotspot of the coronavirus epidemic in Serbia, which include Novi Pazar, Cuprija and Valjevo.

Before the delivery, Vucic visited the warehouses

Vucic stated in the post that it was a big assistance for them and that he knew that people in Novi Pazar will be able to respect that.

He wrote that both Serbs and Bosniaks should know that their state thinks of them and treats them equally as other parts of the country.

"This is not just for the coronavirus crisis, this equipment is here to stay, so one day we will construct the Clinical Center in Novi Pazar as well. This remains permanently here," Vucic said, with a photo of him standing in front of a truck that brought respirators and medical equipment.

"It is very important that we provide capacities to make things much better here. We are investing huge amounts of money in Novi Pazar. When the epidemic passes by, people will start working, and it is our job to do even more," Vucic said.

Ministers Rasim Ljajic, Zlatibor Loncar, as well as Mayor Nihad Bisevac and hospital director Meho Mahmutovic greeted Vucic in front of the municipal building where a truck with respirators was parked.

He says a lot of help has been brought to Pazar, which has been donated permanently: 10 clinical respirators, three transport respirators that can be used partly as clinical, then 22.000 surgical masks, 3.000 epidemiological masks, thousands of gloves, rubbers, protective suits and 250 suits.

"Everyone should know that we care about you and take care of your health," Vucic said, expressing hope that the outbreak in Novi Pazar would be curtailed.

"What we could do as the Serbian state, we did it and showed that we make no difference whether one is a Serb or a Bosniak, that we are human and that we will fight for the health of all people".

Vucic also said that he had discussions with the mayors of the municipality for one hour and that the Serbs and Bosniaks at the meeting spoke as brothers with no difference, with the aim of preserving life in Novi Pazar.

"I ask people to be disciplined, the next two weeks will be extremely difficult. Please show responsibility and seriousness. Today we started talking about big projects here and next year the railway from Pozega to Duga Poljana will be built, which will connect the whole Pester with Belgrade and Sarajevo", Vucic said, and thanked them for their hospitality.

He added that next time he would come under different circumstances, he would discuss with them numerous economic projects.

"It's something that the citizens of Pazar will know to appreciate," he explains.

He also explained that it is necessary for citizens to be disciplined in order to keep citizens healthy and to save lives.

Mayor Nihad Bisevac claims that the situation is difficult and worrying and thus this assistance is so appreciated. He thanked fellow citizens who respected the recommendations and measures, but also rebuked the minority who did not respect the measures taken.

"I want to thank the president for everything he does for this city," he said at the end of his address.

"I think this is the biggest help at the most important moment. Today, the president came for who knows what time in Novi Pazar, but what has been done today makes our hospital a serious center, and tomorrow when we finish the new facilities that are planned, we will be a serious center in the region", said Meho Mahmutovic, Director of the Hospital.

He added that it was neither a moment nor a time for not complying with the measures that were prescribed, as both people and the system were threatened.

"That's how you threaten our entire system," he says, and finally thanked President Vucic for thinking of Novi Pazar.