After Saturday's protest the opposition announced its demands, the authorities reacted, and the ruling SNS hinted at a decision on early elections. 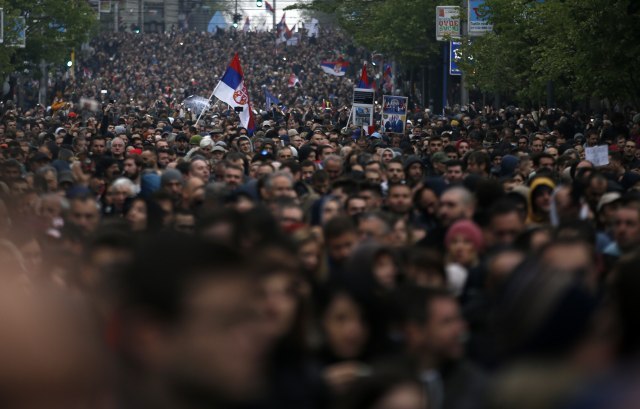 That is what the Belgrade press writes on Monday. The SNS presidency, the expanded Executive Board and the Main Board will hold sessions on Tuesday in Belgrade's Sava Center congress hall.

According to these reports, the main topics will be the opposition pressure and early elections. The sessions will reportedly be completely public, and the decisions will be announced by midnight the same day.

Bojan Klacar from CeSID has told Prva TV that the latest demands of the opposition are different from previous ones. "We now have more concrete, rational and somewhat more realistic demands, primarily those related to electoral conditions, which should be a central theme," he said.

According to him, the demands regarding the change in REM and RTS represent "a somewhat more slippery ground." He also said that the deadline given by the opposition to the authorities to meet these demands, which is next Saturday, realistically cannot be met.

Klacar also said that tomorrow's sessions will include all those who have any weight in the SNS, but that Tuesday should not be expected to be "D day."

"It can be expected that tomorrow we will not get the answer as to whether early elections will be held," he said.

Talks can be conducted in two ways, in parliament, which at the moment suits the authorities, Klacar explained, adding that the second way was to create a special type of dialogue at a round table that would bring representatives of the opposition and the authorities together.