PM in Brussels for chapter opening, meets with Kerry 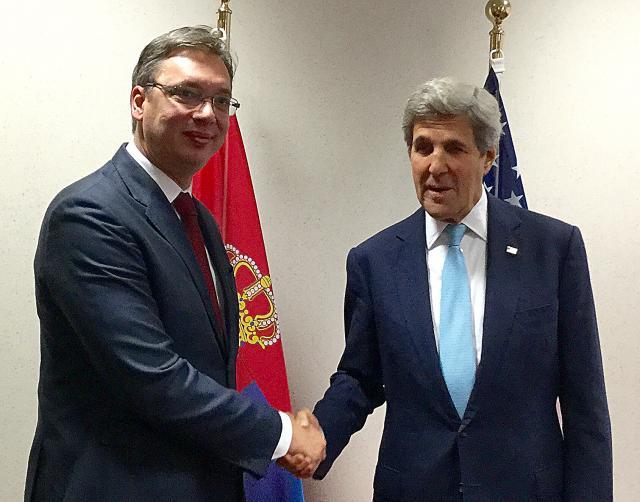 He "congratulated him on the opening of new negotiation chapters in Serbia's EU accession talks and his government's regional policy and cooperation," Tanjug has reported.

Commending the policy of regional stability pursued by the Serbian government, Kerry urged Vucic to continue the active and honest approach to the process of reconciliation among Western Balkan nations, which he said had produced significant results in easing tensions in the region.

Vucic and Kerry also discussed ways of improving the already good Serbia-U.S. ties, expressing a mutual readiness to do so, said a statement released by Vucic's office.

Vucic thanked Kerry for the clear and unequivocal U.S. support on Serbia's European path, in particular in the process of opening negotiation chapters 23 and 24.

The meeting was also attended by U.S. Assistant Secretary of State Victoria Nuland.

Vucic is in Brussels on Monday through Tuesday for an EU-Serbia intergovernmental conference at which the negotiation chapters are expected to be opened.

The opening of Chapters 23 and 24 in Serbia's EU accession talks is a signal that the country is on a stable path and recognized as a significant and serious EU membership candidate, Serbian Minister without Portfolio in charge of EU integration Jadranka Joksimovic said Monday.

Speaking to reporters in Brussels, Joksimovic noted that work on the rule of law-related chapters would bring concrete benefits to all Serbian citizens and new investments.

Asked about the conditions Croatia has set for Serbia as part of the accession talks, she said Serbia was always ready for discussions and analyses, but that there was no place for bilateral matters in the negotiation process, which envisioned clear procedures and criteria.

"A declaration recently signed by Serbia and Croatia at the highest level is exactly about solving bilateral issues at bilateral level, while European procedures have their rules. It is also a good message for the future," Joksimovic said.

In a world full of tension and turmoil, the EU's opening of new chapters with Serbia is a signal the country is on a stable path, she said.