An unannounced guest at a meeting with Vucic, Grenell retweeted PHOTO 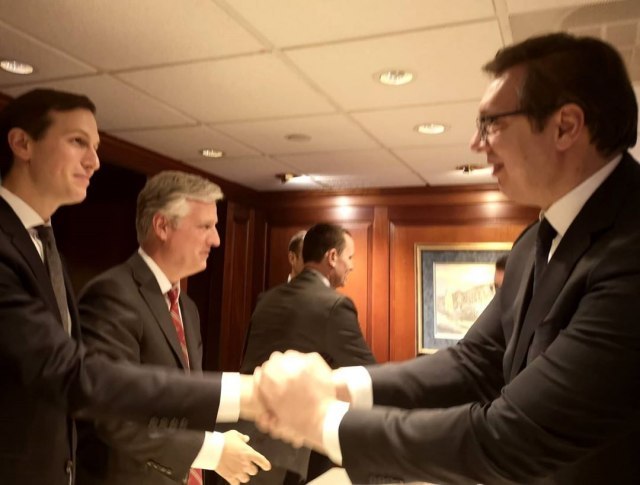 "Ending a two-day visit to Washington, DC with excellent talks at the White House with US National Security Advisor Robert O'Brien, Special Advisor to the US President and his son-in-law Jared Kushner, and Special Envoy for the Belgrade-Priština dialogue Richard Grenell".

According to Blic, that conversation was not announced, and Kushner was invited to the meeting by Richard Grenell.

"Blic" source said the conversation lasted more than an hour and was "very successful".

"They have shown a lot of understanding in solving the Kosovo problem, they know that it is a very difficult issue for Serbia, but also that everyone has to gain, or lose, that both sides have to be dissatisfied," the source said.

Grenell also tweeted a tweet from the US National Security Council (NSC) saying that relations between Kosovo and Serbia are of great importance to the administration of US President Donald Trump.

The NSC, a body that advises the US President on national security and foreign policy, has included in a Twitter post a photo from a meeting of National Security Adviser Robert O'Brien and US Presidential Special Envoy for the Belgrade/Pristina Dialogue Richard Grenell with the Presidents of Kosovo and Serbia, Hashim Thaci and Aleksandar Vucic.

Ending a two-day visit to Washington, DC with excellent talks at the @WhiteHouse with US National Security Advisor @robertcobrien, Special Advisor to the US President @jaredkushner, and Special Envoy for the Belgrade-Priština dialogue @RichardGrenell. pic.twitter.com/XAdR65j7c3

Yesterday, NSA O’Brien and @RichardGrenell met with @predsednikrs and @HashimThaciRKS. The Serbia-Kosovo relationship is of great importance to the Trump Administration. pic.twitter.com/BLhl9DKUkD