PARIS -- After the defeat in the final of Roland Garros, Novak Djokovic talked about chasing down Roger Federer and Rafael Nadal

PARIS -- After the defeat in the final of Roland Garros, Novak Djokovic talked about chasing down Roger Federer and Rafael Nadal 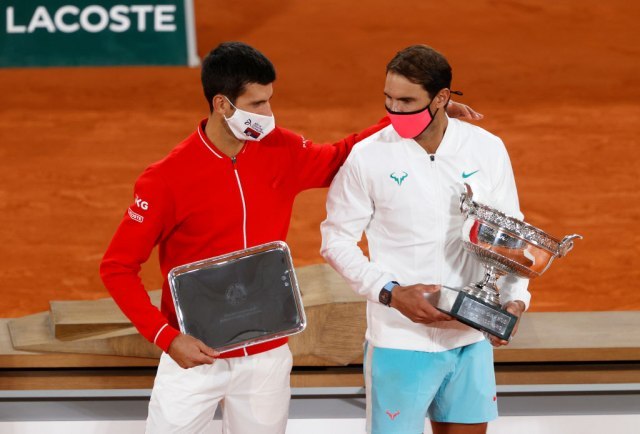 Djokovic did not even manage to win the set against Nadal in the final of the tournament in Paris.

Nadal thus won the 20th Grand Slam trophy in his career, as many as Roger Federer has, and Novak remained at 17 Major titles.

Novak does not think that he cannot catch up with the Spaniard and the Swiss, so he will continue to chase the record number of Grand Slam titles.

“If I thought it was too late I would have ended my career today,” he said. “But I do not think it is too late. I will keep on going as long as I have fuel in my legs and love and desire towards the sport. One defeat even though it is a Grand Slam final, cannot destabilize me. I have developed a lot, as the English say, I've developed 'thick skin' and I do not allow myself to be disturbed by various speculations and situations of this kind," said Djokovic after the final.

Novak plays tennis because he still loves it, but that doesn’t mean he doesn’t have extremely high goals.

“Myself and Nadal, and especially Federer, we have been written off many times, people were sending us into retirement, but we keep coming back and proving that we are the best in the world despite all the pressure. My desire is still huge. I love and enjoy this game,” he said. “My professional goals stay the same—historic No.1 ranking and Grand Slam titles. If I achieve the former, which I intend to do next year, my hope will turn even more to Grand Slam tournaments in terms of approach, energy and schedule".

Novak will almost certainly overtake Roger in the number of weeks spent at the top of the ATP rankings during the first half of next year. That, in addition to the number of Grand Slam titles, is the biggest goal for him.

Djokovic says he will be quick to put the past behind him and regroup for the rest of the season. He is still headed for his sixth career year-end No.1 ranking, which would bring him even with Pete Sampras on the all-time list.