After an ignoble crisis, German Chancellor Angela Merkel has managed to save her government by committing to a refugee policy of isolation. 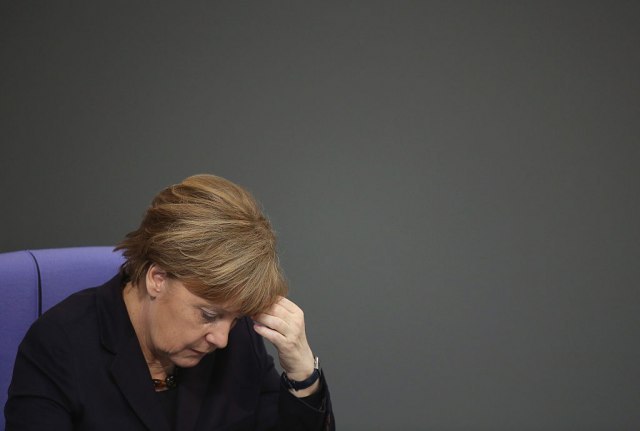 These last two weeks have been about far more than determining the chancellor's fate. They have been a bitter struggle over the fundamental direction of European refugee policy. And the forces that have been backing closure of the borders have won. These are politicians who want to prevent people from making the life-threatening journey across the Mediterranean in the first place.

This should be achieved through reinforced border protection, but also by building camps in North Africa. In future, refugees will have to wait until it is certain whether they are desirable in Europe. This may be because they have a right to asylum, or because their labor is needed. The situation within Europe will also be governed more heavy-handedly and in future refugees will, theoretically, be accommodated quickly in centers or camps, cases will be dealt with swiftly and unwanted visitors will be returned speedily.

These are the major plans that Angela Merkel negotiated with her European colleagues last week and with which she is rejecting her previous open border policy. These are the plans that finally led Interior Minister Horst Seehofer to relent and ended the sad German domestic political farce of the past few days — and thus saved the German government from breaking apart for the time being.

That's the good news. Not only for Germany, but also for Europe. Only populist agitators have an interest in Europe's largest economy sliding into an open-ended governmental crisis in this phase of general uncertainty. The stabilizing power of the country is too important. This is one of the reasons why Merkel so quickly succeeded in setting up a European summit where the broad guidelines of this new European migration and asylum policy were agreed upon. Europe knows what Angela Merkel has to offer in these times.

This puts an end to the acute crisis. However, no real answer to the challenges has been found — let's not kid ourselves. After all, in which North African countries should the reception camps be built? The reactions so far have been predominantly hostile. And with which countries can you do business if you want to preserve human rights at the very minimum?

And who will take care of refugees if they are prevented from moving on? The latest pictures from Algeria show what can happen. Thousands were literally sent to the desert, including children and pregnant women, where at almost 50 degrees Celsius (122 Fahrenheit) in the shade they died miserably, of thirst and starvation. Countries like Lebanon are already taking in more refugees than the whole of Europe put together. This is also part of the truth of a European policy of isolation.

There are also currently more questions than answers within Europe. Here, too, it is uncertain in which country camps are to be built. Which governments are really prepared, in the end, to lighten the burden carried by Italy and Greece, those countries with the longest external borders and, correspondingly, the highest number of refugee arrivals? This quick agreement between the Christian Democrats (CDU) and the Christian Social Union (CSU) was only possible because everything remained vague. The only thing that can be implemented quickly is to strengthen border management. There are lucrative times ahead for the European Border and Coast Guard Agency, Frontex, and for fence-building companies.

Angela Merkel has been fighting for a humane refugee policy for three years. And she has also made mistakes. Communication was often poor, there were technical glitches. But now she has been forced to adopt a new policy of harshness by the mood in her own country, the new political party landscape, the conditions in Europe, not least her own government partner, CSU.

Her deep yet simple conviction that we must help those in need is unlikely to have changed. It will be even more important to her now to make sure that not only fences are built, but also that the government works hard on implementing proper immigration laws, on entering into new partnerships with African states and on supporting, much more significantly than before, the forces there that are fighting to ensure that people can stay in their countries of origin.

Fences and border guards may protect European governments for the moment. But they are by no means a permanent solution.